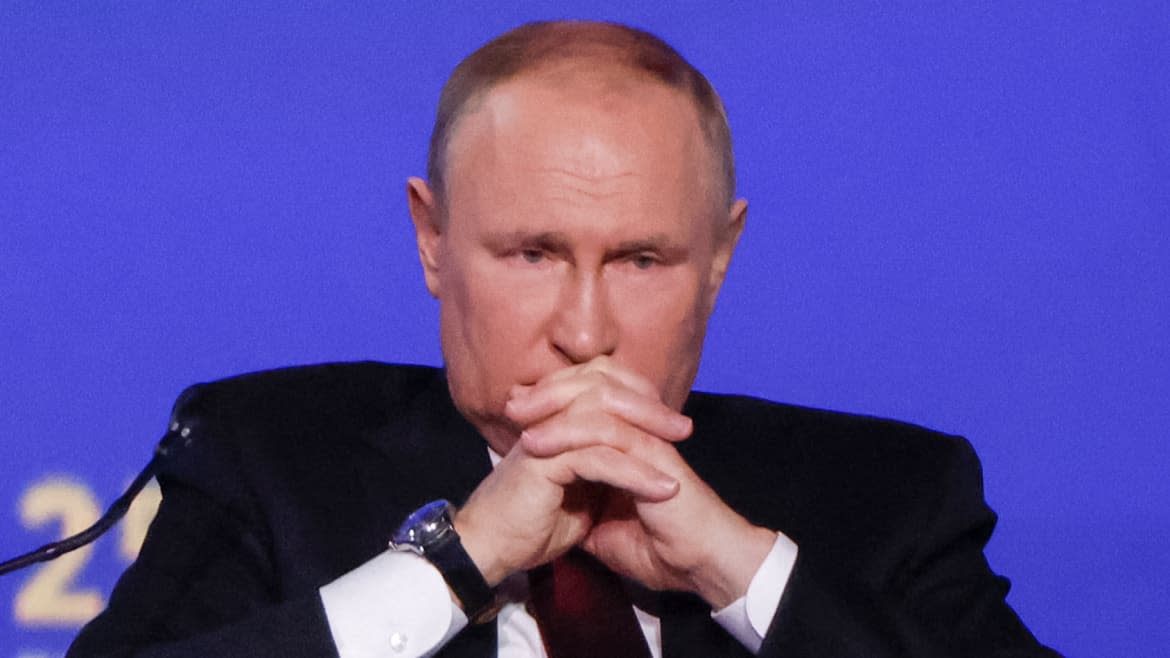 Russia’s flagship economic event, the St. Petersburg International Economic Forum (SPIEF, which ended over the weekend), served as another reflection of the country’s shifting place in the world. After Russia invaded Ukraine and was largely shunned by the international community, Western investors who had turned up at the event dubbed “the Russian Davos” in droves during previous years were conspicuously absent. Likewise, there would be no foreign moderator. This year’s SPIEF was moderated by Margarita Simonyan, editor-in-chief of the controversial media outlet RT (formerly known as Russia Today).

Earlier in June, discussing Simonyan being selected for the role, Putin’s spokesman Dmitry Peskov told TASS: “The sanity of many prominent Western reporters is currently raising questions… all of them have simply gone nuts… Margarita [Simonyan] is a world class reporter and media manager. So for us, she leaves journalists in the dust internationally, that’s why it’s her who will be the moderator.”

Fresh from the event, Simonyan appeared on Sunday Evening With Vladimir Solovyov, gushing about her recent meetings with Putin and spouting a new fabulist tale about what Russia is supposedly doing in Ukraine. The host of the program, Vladimir Solovyov, asked Simonyan for details of her meetings with the Russian authoritarian before and after the forum. She grinned and coyly retorted: “Of course, I can’t tell all about it publicly, I’ll later whisper it into your ear.”

Solovyov hinted that Simonyan may have even given Putin some advice herself: “Based on recent observations, the president is open to receiving information that is coming from different levels… Our decision-making centers aren’t acting as Olympic Gods. They take information from everywhere: official sources, unofficial sources, war correspondents, people on location, which is very important.”

In the best traditions of Soviet and North Korean propagandists, the head of RT started her monologue by praising Putin’s great health, indefatigable stamina, unshakable confidence and cheerful disposition.

Team Putin in a Panic Over Jan. 6 Hearings ‘Lynching Trump’

She claimed that the most frequently requested questions average Russians wanted her to ask the Russian president were simple: the first one was a message of implicit support and the second one reflected the everyday citizens’ urgent plea to strike the “decision-making centers” as soon as possible. Angrily clenching her fist, Simonyan exclaimed: “I also want to ask, why don’t we strike them? Where are those red lines?” She recounted Putin’s response: “I won’t say which red lines they are, but they know about them… I won’t name them due to the military tactics: why would we show them our cards in advance?”

Simonyan claimed that one of Putin’s reasons for not carrying out more intense bombings in major cities was a rather practical one: “He said, “Would we want to turn those cities into Stalingrad?” Indeed, our people are there! Those are our future cities! It’s obvious… This is our land and our people, we’ll later have to restore it.”

After her secretive meetings with Putin, Simonyan—who for years promoted the idea of Russia’s armed intervention in neighboring countries—emerged with a drastically different iteration of the events being witnessed by the rest of the world. She outright denied that Russia is waging either a war or even a special operation in Ukraine. Instead, Simonyan alleged, there is a civil war and Russia simply took the side of the Russians.

The head of RT did her best to sell an implausible story, laced with genocidal denial of Ukrainians as a people, and an outright dismissal of an idea they could possibly be fighting to defend their Motherland. Describing one of the videos of a Ukrainian POW she recently watched, Simonyan said: “A surrendered soldier of the Ukrainian Armed Forces was sitting down, his face is absolutely Russian, totally Russian. None of you could tell who he was, he’s Russian. Big blue eyes, blonde hair and beard. He said, “I was mobilized under mandatory enlistment.” We should understand, not all of them are there of their own free will.” Simonyan, who often claims that the Russian troops are in Ukraine fighting for their Motherland, absurdly denied that such a concept could ever apply to Ukrainians fighting on their own soil.

Recounting the video with a captive POW, Simonyan claimed: “He doesn’t even care where to live. He has no military-patriotic feelings that he’s defending his Motherland. He understands perfectly well that he isn’t defending any Motherland, but somebody else’s interests that have nothing to do with his own. He couldn’t care less where he ends up living: in Donetsk, Belgorod or his village near Kyiv, where he’s from.”

As for those fighting against the Russian troops or opposing Russian aggression, Simonyan noted: “There is a significant number of Nazis and indoctrinated people, with whom there isn’t much to be done, other than to have them shot under the laws of the DPR [the supposed Donetsk People’s Republic].”

In addition to advocating the murder of Ukrainians resisting Russia’s invasion, including POWs, Simonyan refused to acknowledge their very existence as a people in any context aside from being either Russian or anti-Russian. She said, “It’s obvious to any person that there is no war between Russia and Ukraine. This isn’t even a special operation against the Ukrainian Armed Forces. This is a civil war in Ukraine. Part of Ukrainians, who are Russophobes and are anti-Russian in the same sense fascists were antisemitic—absolutely the same way—is destroying another part of its own people. Russia is simply supporting one side of those warring parties. Why this particular side? That is obvious, because they are Russians. Those are our people. And over there, they are anti-Russians. That’s all.”

Realizing the impossibility of successfully selling this preposterous explanation to Western audiences, Simonyan speculated that in the event Russian state media abroad continued to operate unabated, Americans and Europeans would believe Russia’s alternative portrayal of its aggression and electoral chances of their leaders who support Ukraine “would tumble downward, from 20-30 percent approval rating all the way to zero.” Simonyan surmised, with a sigh: “From their point of view, I understand how smart it was for Europe and America to get rid of RT and Sputnik.”

Read more at The Daily Beast.

Get the Daily Beast’s biggest scoops and scandals delivered right to your inbox. Sign up now.