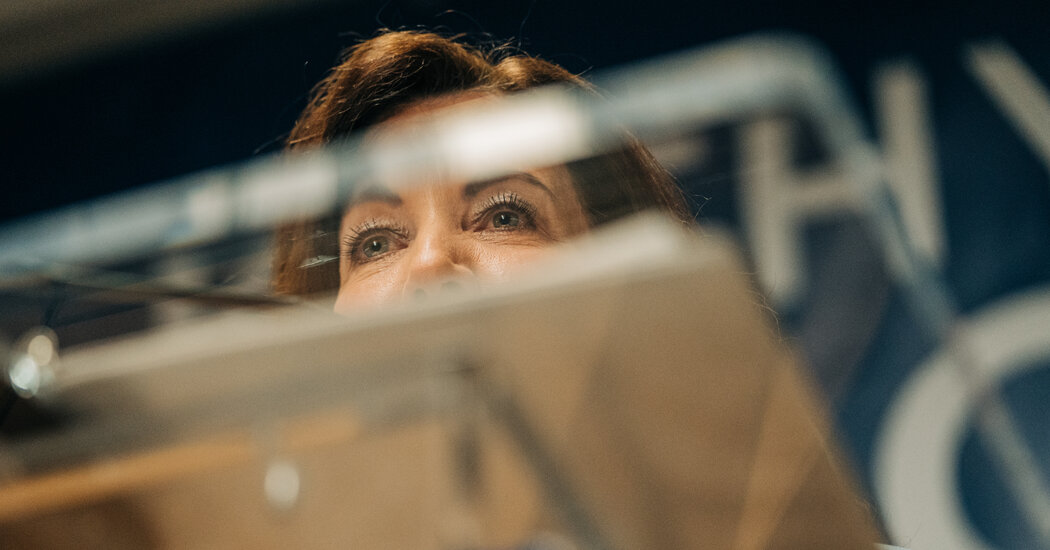 Charles B. Rangel, the longtime dean of Harlem politics, had a blunt question for two of Gov. Kathy Hochul’s top political aides at a private meeting last month: Where’s the campaign?

Mr. Rangel told the campaign officials they were concerned that the governor was unwisely leaving vote-rich Black and Latino neighborhoods unattended. No posters, no palm cards, no subway surrogates or other ground operations typically used to drive voters to the polls for the June 28 primary for governor of New York.

Representative Gregory W. Meeks, the head of the Queens Democratic machine, shared similar concerns around the same time. In a call with Ms. Hochul, he urged her to give more attention to communities like his and put together a more diverse political operation that could excite voters.

And more recently, three major union leaders backing Ms. Hochul who spoke with The New York Times said they were perplexed that the governor’s team has not asked for help to canvass, rally or perform other political errands her predecessors demanded. One of them said flatly he saw no evidence of campaign activity.

By all accounts, Ms. Hochul is headed toward a comfortable primary win. She has cornered nearly every major political endorsement and collected record-breaking donations, while outspending her opponents, Thomas R. Suozzi and Jumaane D. Williams, by millions of dollars on television and digital advertising.

The commanding lead has enabled Ms. Hochul’s team to deploy a so-called Rose Garden strategy, eschewing the kind of all-out, on-the-ground campaign used by her challengers in an effort to conserve cash and position a new governor still introducing herself to New Yorkers above the political fray ahead of a grueling general election this fall.

Most of the political appearances she has made this spring — in Black churches or marching in parades, for instance — have been official government events or unpublicized appearances. In the last month, her campaign has flagged only five official events for the media.

In interviews over the last week, a broad spectrum of elected officials, party leaders and Democratic strategists expressed worry that the governor’s low-key approach may come at the cost of building the kind of old-fashioned political ground game and enthusiasm with bedrock Black, Latino and union voters that a relatively untested candidate from Western New York like Ms. Hochul will need to drive Democratic voters to the polls in November.

They fear that the governor’s campaign strategy could cause Democratic turnout in the state’s largest liberal stronghold to falter, leaving Democrats in key congressional and state races vulnerable, if not endangering the party’s hold on the governor’s mansion.

“She acknowledged lots of people in her campaign ran statewide but are not necessarily endemic to New York City politics, which is important,” he added. “When you’re running for governor, you’ve got to expand that base. That’s what she is doing.”

And although Ms. Hochul seems poised to win the primary, Democratic strategists warned that soft turnout in the primary could hurt her running mate, Antonio Delgado, who is in a tighter contest against Ana María Archila and Diana Reyna, and potentially saddle Ms. Hochul with an adversarial running mate in the fall.

“Everyone is scratching their heads. She’s held no rallies and she needs to get out the vote,” said George Arzt, a Democratic strategist who has run campaigns in New York City since the 1980s. “The person who’s in jeopardy is not her, but her running mate.”

Tyquana Henderson-Rivers, a senior adviser to Ms. Hochul with deep ties among New York City Democrats, defended the governor’s approach in an interview, acknowledging that the campaign was taking a “slower build” approach than some elected officials might be used to. But it has its reasons.

This is the first year New York’s primary for governor is occurring in June, rather than September, extending the campaign season between the primary and the general election. The pandemic still makes certain in-person campaign tactics difficult. And Ms. Hochul’s team is consciously conserving resources to prepare for a greater general election threat than her Democratic predecessors have faced in years.

“We hear you,” Ms. Henderson-Rivers said, when asked about fellow Democrats raising concerns to the campaign, before adding that Ms. Hochul’s operation would be humming when it matters. “It will not be cold, I assure you. We’re revving.”

To be certain, there are signs that the governor’s campaign is ramping up.

Ms. Hochul attended a breakfast hosted by Mr. Meeks in southeast Queens with more than 200 clergy and civic leaders in mid-June. Mr. Rangel acknowledged that the Hochul campaign had increased its presence in Harlem, where dozens of volunteers and paid staff, including from the Hotel and Gaming Trades Council, fanned out this past weekend to knock on doors and hand out literature.

A campaign spokesman, Jerrell Harvey, said that Ms. Hochul’s paid media and field program “will reach voters where they are, and benefit all Democrats now and in November.”

The campaign says it has spent more than $13 million on TV and radio airwaves so far, another $1 million-plus on digital advertising, and the state party has targeted more than 400,000 households with traditional mail, many of them African American, Latino and Asian — figures far higher than any of her rivals.

“If I were the Democrats, I’d be worried about a lot of things in November,” said Jason Ortiz, a veteran political operative with close ties to the hotels and casino union. “But Kathy Hochul being governor would not be one.”

And yet, second-guessing about Ms. Hochul’s approach has been relatively common. Some supporters of the governor are quietly making comparisons to her predecessor, Andrew M. Cuomo, a ruthless political tactician who deployed labor unions, political surrogates and wielded the governor’s office to run up big margins.

Mr. Cuomo made particular use of organized labor, using them as de facto political staff, deploying union members to shadow his opponents, knock on doors and create a sense of momentum around his campaign.

Ms. Hochul, with notable exceptions, has so far largely limited her requests to donating money. Some of the unions, who requested anonymity to avoid alienating Ms. Hochul, said they planned to start get-out-the-vote efforts of their own volition.

“It’s an unusual approach for a governor, but I think it’s a strategic one that may prove to be better in the city than one would expect,” said Henry Garrido, executive director of the city’s largest public union, District Council 37. “Normally what would happen, we have a model where you try to get as much momentum through physical presence, showing up everywhere, rallying and speaking.”

Instead, Mr. Garrido said, the governor had enlisted his help in quieter events in Latino communities in Inwood and the Bronx. He predicted they would work in her favor.

Unlike Mr. Cuomo, Ms. Hochul has tended to shun the political spotlight for many more overtly political events, like a Monday stop in the ultra-Orthodox Jewish community of Borough Park, electing not to publicly announce them beforehand.

“She’s walked the streets with me,” said Representative Adriano Espaillat, who represents Mr. Rangel’s old district. Mr. Espaillat has tweeted about the events, but he said Ms. Hochul’s decision not to broadly publicize them was her prerogative: “They do what they think is best.”

In central Brooklyn, home to another large block of Black voters whose votes help power winning Democratic coalitions, Ms. Hochul appears to still have work to do to win over two powerful leaders who could help galvanize votes: Letitia James, the popular New York attorney general who briefly ran against her, and Representative Hakeem Jeffries.

Mr. Jeffries has formally endorsed Ms. Hochul (Ms. James has not), but he has yet to campaign with her and has told associates he is disappointed Ms. Hochul did not speak out against a court-imposed congressional redistricting plan that wreaked havoc on some communities of color and the state’s delegation to Washington.

Asked if he thought Ms. Hochul was doing enough in communities of color in New York City, Mr. Jeffries said he had no comment. Ms. James’s campaign also declined to comment when asked if she expected to make an endorsement in the race.

Democratic officials and campaign strategists in Latino strongholds in Upper Manhattan and the Bronx have shared their own concerns.

Luis A. Miranda Jr., a founding partner of the MirRam Group, a political consulting firm that is working on Ms. James’s re-election campaign, said he emerged from a recent dinner with Ms. Hochul impressed with both the governor and a new “Nueva York” initiative by State Democratic Party leaders dedicated to turning out Latinos. But he said the governor and her team had more to do to persuade Latino voters and leaders, some of whom have cast doubt on Mr. Delgado’s claim to Afro-Latino roots.

“Where she has to do the work is not exclusively with her campaign, it’s with the Democratic Party that should be serving her and her ticket,” he said. “Everyone thinks that if they hire three people and have a slogan, they are reaching to the community. It’s window dressing.”

For his part, Mr. Meeks said he was confident Ms. Hochul understood the gravity of correcting course, and would generate a strong showing in his part of Queens. But given the stakes for the party, he said “of course there can be improvement.”

“It’s essential,” he said, summoning memories of Republican Gov. George E. Pataki’s 1994 victory. “The one time that we ended up with a Republican governor, I remember that very vividly because it was a low turnout, particularly in the African American community in the City of New York.”