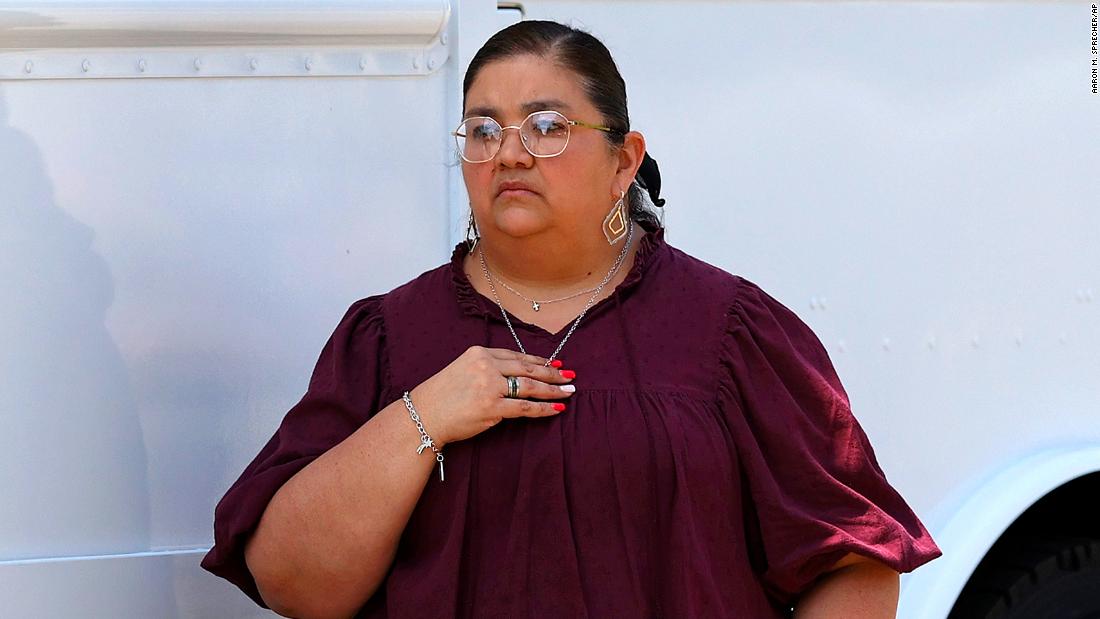 In an exclusive interview with CNN, Gutierrez was asked whether she agreed with a legislative report that cited a “culture of non-compliance with safety policies” at the school.

“Absolutely not,” Gutierrez said in response.

Gutierrez said she immediately initiated a lockdown with an app called Raptor after hearing that an armed man had jumped a school fence.

“I feel that I followed the training that I was provided with to the best of my abilities,” she said when asked whether she felt she should lose her job. “And I will second guess myself for the rest of my life.”

Arredondo, who is on unpaid administrative leave, has previously said that he did not consider himself to be incident commander that day.

Asked about the law enforcement delay in confronting the shooter, Gutierrez said she is frustrated but not in a position to find fault.

“I’m not law enforcement and I cannot pass judgment and tell them how to do their jobs, just like I would not ask them to tell me how to do mine,” she said. “I don’t feel that I’m in a position to blame anyone.”

Gutierrez has been placed on administrative leave with pay, according to her attorney, Ricardo Cedillo.

The school board did not comment on her leave at a Monday meeting. Gutierrez, who started as a fourth grade teacher in 2008, has worked for Uvalde CISD for more than two decades.

In a letter to members of the House Committee that investigated the shooting, Gutierrez disputed several of their findings. She said the door to room 111 — one of two classroom where the victims were killed — was checked by custodial staff every evening, including the night before the shooting. She also wrote she has no recollection of the teacher in that room complaining about the door not locking, according to the letter, which was released by her attorney Wednesday.

“What I know for a fact is that the door to room 111 did in fact lock,” she said in the interview. “And the reason I know that is we conduct regular walk throughs of the campus and I have myself used my master key to unlock that door.”

Gutierrez in her letter acknowledged problems with spotty Wi-Fi at Robb. She wrote that she did not use the PA system the day of the shooting because her training was that its use could “create a panic.” She denied the existence of a “culture of complacency” at the school and said it’s “unfair & inaccurate” to conclude she was complacent about security.

Gutierrez said in the letter she “will live with the horror of these events for the rest of my life” and that she wants to keep her job “to be on the front lines helping children who survived, the families of all affected, and the entire Uvalde community.”

CNN has reached out to the Uvalde Consolidated Independent School District and the Texas House investigative committee for comment.

Gutierrez’s leave came as Uvalde officials sought to reassure frustrated parents about the safety of their children when classes resume.

The Uvalde massacre was America’s deadliest school shooting since 2012.
The legislative committee report on the May 24 school shooting cited Robb Elementary’s “culture of non-compliance with safety policies,” including its failure to adequately prepare for the risk of an armed intruder and the common practice of leaving doors unlocked.

The report said Gutierrez and school administrators knew a lock to one of the classrooms where the killings occurred did not work properly and failed to repair it.

The day of the shooting, Gutierrez was in her office after an awards ceremony and attempted to initiate a lockdown on the Raptor app but “had difficulty making the alert because of a bad wi-fi signal,” according to the legislative report. She also did not attempt to “communicate the lockdown alert over the school’s intercom,” the report said.

School personnel “frequently propped doors open and deliberately circumvented locks,” according to the legislative report. This behavior was “tacitly condoned” by school administrators and district police — and not treated as “serious infractions.”

Locking doors as required could have slowed the gunman’s “progress for a few precious minutes—long enough to receive alerts, hide children, and lock doors; and long enough to give police more opportunity to engage and stop the attacker before he could massacre 19 students and two teachers,” the Texas House report stated.

Legislators also faulted the police response and the failure of school officials and others to heed numerous warning signs about the shooter. Their report said state and federal officers on scene were equally culpable for the delay in confronting the shooter.

Uvalde school officials on Monday disclosed efforts to improve security when classes resume early next month. Plans include the installation of bulletproof windows and metal detectors, the hiring of 10 additional police officers, and the identification of one point of entry for each school. Five officers were employed by the district at the time of the shooting, according to the legislative report.

CNN’s Rosalina Nieves and Brad Parks contributed to this report.