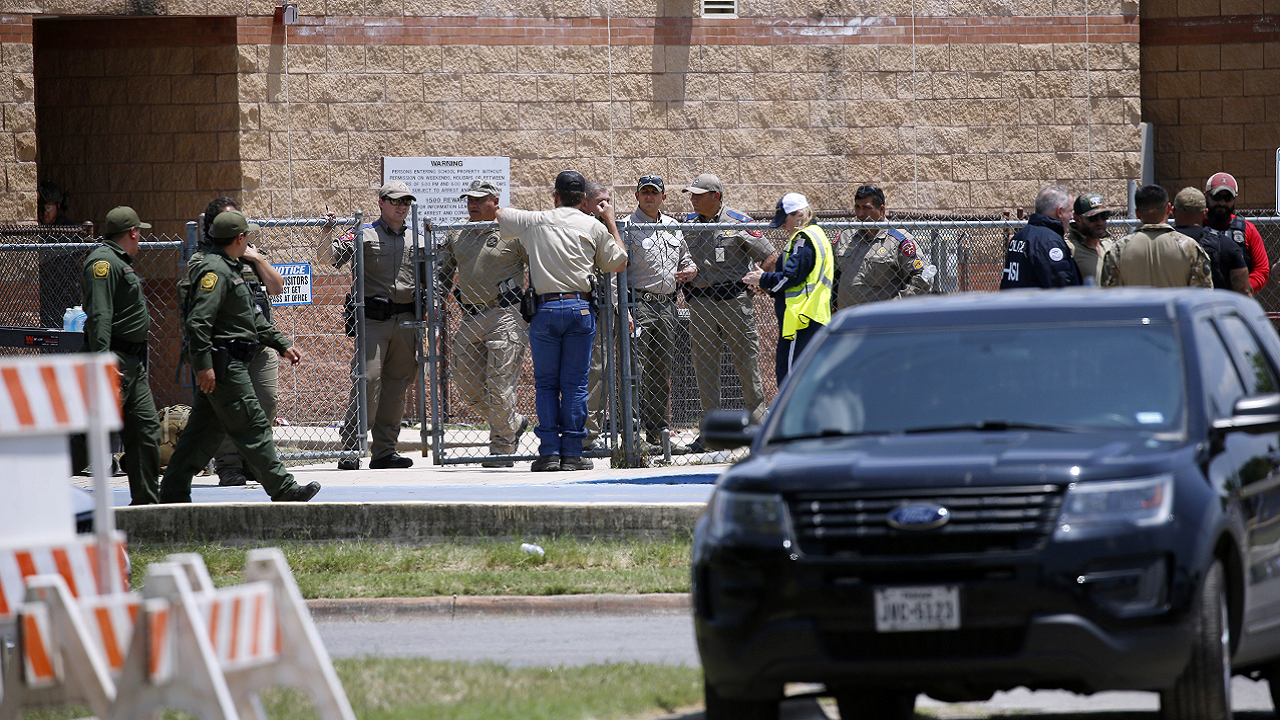 Two Uvalde city police officers reportedly passed up a moment‘s chance to shoot a gunman outside the Robb Elementary School in Texas before he then killed 21 people, including 19 children, a senior sheriff’s deputy told The New York Times Friday.

One city police officer armed with an AR-15-style weapon hesitated over concerns that he might hit a child, Chief Deputy Ricardo Rios nearby Zavalla County told the publication.

Rios said the unidentified officer’s chances of reacting likely passed in a matter of seconds.

Law enforcement, and other first responders, gather outside Robb Elementary School following a shooting on Tuesday, May 24, 2022, in Uvalde, Texas.
(AP/Dario Lopez-Mills)

An officer from another department in the Uvalde school district police force reportedly drove past the gunman after not seeing him in the parking lot.

Both missed opportunities enabled Salvador Ramos to continue into the elementary school and open fire, killing two adults and 19 children – all between the ages of nine and 11 years old.

Texas lawmakers are leading an investigation into the massacre, but witnesses, testimony and the investigation’s objective remain unknown.

Rios said his information had been passed on to the body leading the investigation.

State Rep. Dustin Burrows, who is leading the investigation, appeared frustrated with the Uvalde police department’s apparent lack of cooperation with their investigation earlier this week.

Law enforcement work the scene after a mass shooting at Robb Elementary School in Uvalde, Texas, on Tuesday, May 25.
(Jordan Vonderhaar/Getty Images)

CITY OF UVALDE WORKING TO ‘COVER UP’ POLICE RECORDS FROM SHOOTING: REPORT

“The House Committee is simply seeking the truth. Most have fully cooperated and want to help determine the facts for the Uvalde community and all Texans,” he said in a Thursday tweet. “I do not understand why Uvalde [police department], who routinely questions witnesses itself, would not want the same.”

Burrows later confirmed on Friday that the Uvalde police department would in fact be cooperating with the investigation.

People visit a memorial at Robb Elementary School in Uvalde, Texas, on Thursday, June 2, to pay their respects to the victims killed the school shooting.
(AP/Jae C. Hong)

“Took a little bit longer than we initially had expected,” he said according to reports. “But those conversations did develop…and so they are going to be cooperating.”

It is unclear when the investigation and findings will be released by the Texas House committee.