US Open: Phil Mickelson has nightmare first round 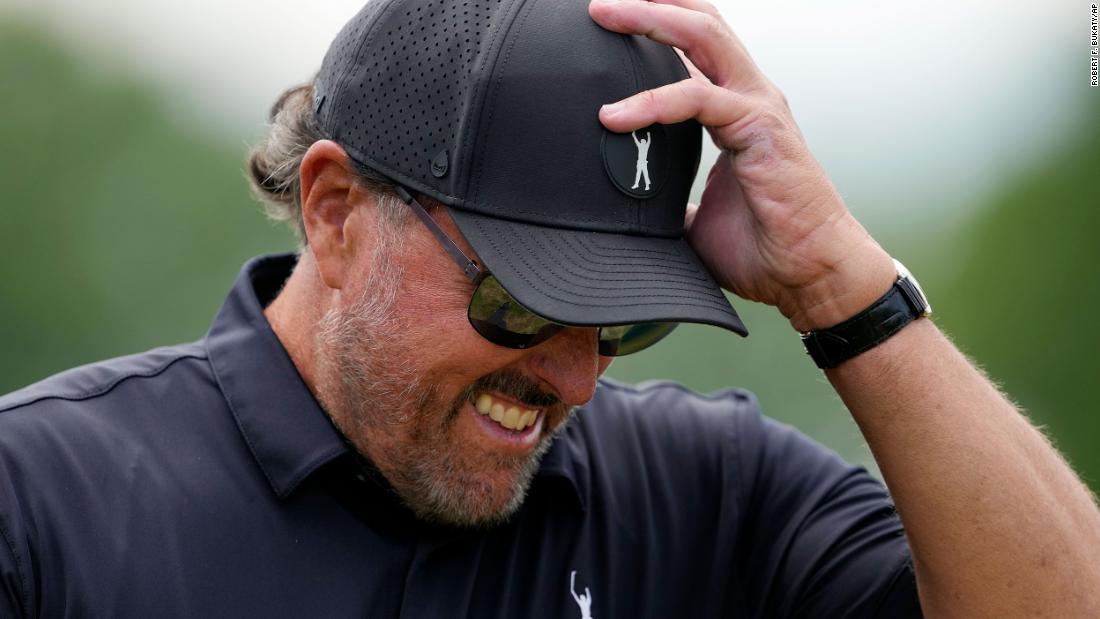 Playing on his 52nd birthday, Mickelson struggled to an eight-over 78, with only seven players of the 156-man field carding a lower score. The six-time major winner must finish in the top 60 by the close of Friday’s second round to avoid being cut.

Though the first players teed off under clear blue skies in Brookline, Massachusetts, the build-up to 122nd edition of the major had been dominated by the storm clouds of the controversial Saudi-backed LIV Golf series.
Backed by Saudi Arabia’s Public Investment Fund (PIF), the new league threatens to upset golf’s traditional format by offering enormous sums of money for players to earn away from established golf tours. Mickelson — one of 17 players suspended by the PGA Tour for participating in the venture — featured in the series’ inaugural event in London last week.
He faced yet another uncomfortable press conference ahead of the major on Monday, fielding questions on criticism directed at himself and other golfers to have joined the breakaway series from a coalition of families and survivors of the 9/11 terror attacks.

A 45-time winner on the PGA Tour, the US Open remains the only major to elude Mickelson, who has finished runner-up in the event a record six times. He arrived at the first tee to cheers from a large crowd gathered to watch.

However, the discomfort from earlier in the week soon continued as Mickelson bogeyed three of the first five holes.

A superb tee shot to the green on the subsequent par-three looked set to lift the American, before three disastrous putting attempts left Mickelson eventually sinking for double-bogey and five-over par after just six holes.

Sandwiched between a bogey and a double bogey, a birdie at the 11th hole provided a brief respite, before five consecutive pars steadied the ship.

Encouragement and cheers continued throughout from fans, but an exasperated grimace and shake of the head after looping an approach shot from the tall grass over the green and into the rough on the final hole epitomized the woes of Mickelson, who eventually tapped home for a closing bogey.

The 34-year-old — whose sole victory on the PGA Tour came at the Valspar Championship in 2017 — sunk a blistering five birdies across the front nine before shooting par across the second half of the course to preserve his one-shot lead.

Ranked 105th in the world, Hadwin showed no sign of nerves at heading the leaderboard.

“Surprisingly, pretty comfortable,” Hadwin told Sky Sports. “I was at ease, which was a nice feeling in a US Open because it doesn’t happen very often.

“Especially in a big event like this, it’s a little bit easy to get the mind racing once you see your name up near the top of the leaderboard and you start playing well, but I did a great job on just zeroing in and focusing on each individual shot.”

Rory McIlroy joined four golfers among the chasing pack at three-under 67, a final hole bogey denying the Northern Irishman from co-leading and finishing with an unblemished scorecard.

The four-time major winner made a strong start, carding two-under before suffering a nightmare bunker-to-bunker shot at the fourteenth hole.

An angry reaction followed, but McIlroy recovered superbly to save par. With successive birdies on the penultimate two holes, he had looked set to end with a flourish before an awkward approach shot on the final hole left the 33-year-old “slightly frustrated” despite an altogether promising start.

“It’s fine, it’s something to learn from,” McIlroy told reporters.

“Sitting here talking about the bad stuff when 17 of the holes were really good — I’m happy with the start.”

Pursuing his first major triumph in eight years, McIlroy looked fired up throughout, with a frustrated club throw on the final hole adding to his reaction four holes prior. Quizzed on the change from his usual composed manner, McIlroy said it was necessary to release his competitive anger occasionally.

“To remind yourself sometimes how much it means to you,” he explained.

“The margins are just so fine in this tournament, and I think you can see that out there with some of the reactions.”

Ranked 445th in the world and arriving as a qualifier, the Englishman was among the first to tee off and returned to the clubhouse as the early leader.

A scintillating front nine saw Tarren sink three birdies and an eagle at the eighth hole. The 31-year-old bogeyed the tenth but settled with eight successive pars to cap an opening round beyond even Tarren’s wildest dreams.

“I’m kind of pinching myself,” Tarren told reporters. “I didn’t realize it was on the top of the leaderboard until I pulled that final putt on the 9th hole.

“Just excited with my start, and let’s see what the next few days holds.”

Scottie Scheffler shot a par-70, the World No. 1 chasing his second major of the year after winning the green jacket at The Masters in April.

Friday’s second round is slated to tee off with the first groups at 6:45am E.T.