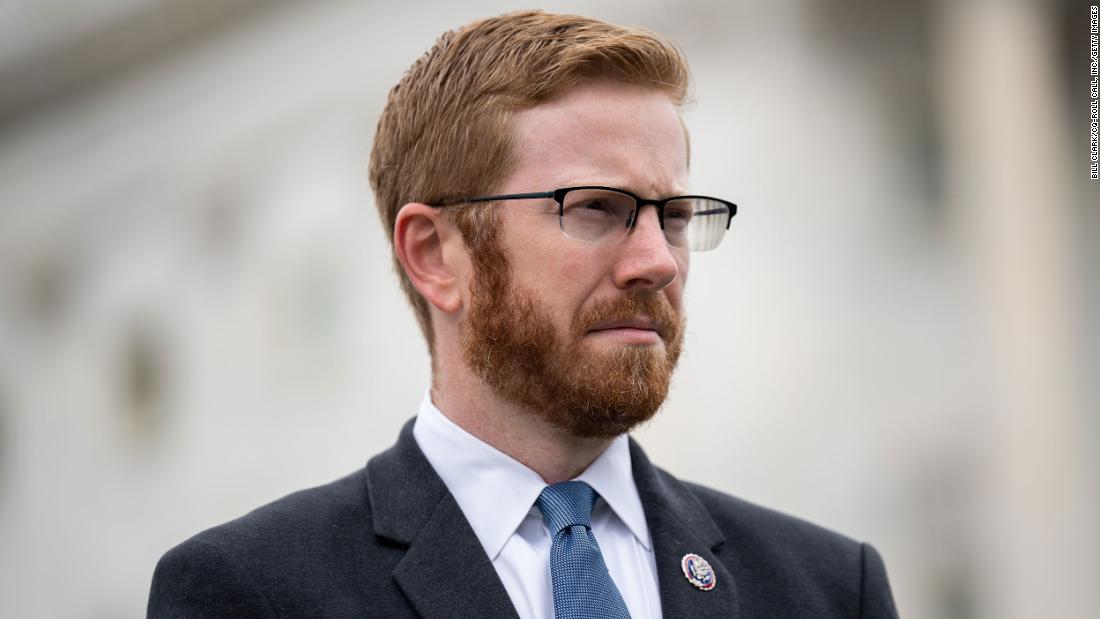 Now, that vote could end his House career.

A week before his primary, Republicans in Michigan and Washington say that Meijer’s vote has made him the clear underdog in his primary race against John Gibbs, a former Housing and Urban Development department official backed by Trump, the latest sign that loyalty to the former President remains paramount in GOP intraparty battles.

“I think it was the biggest career-ending move in history, possibly, for him to do that,” Gibbs told CNN, saying it “catastrophically” hurt the congressman’s chances of reelection.

“Not for a second,” he told CNN when asked if he regretted the vote.

As he barnstorms his district, Meijer said he confronts questions from voters about why he cast his vote — even as he tries to explain that his first two years in office were far more than just being one of 10 Republicans who voted to impeach Trump. But when he’s asked why he voted to charge Trump with inciting the insurrection, he says he’s perfectly blunt.

“For three hours after the Capitol was attacked, when myself, the House chamber and several hundred of my colleagues were having to flee from a mob, when the vice president, his wife, his daughter were running from crowds screaming ‘hang Mike Pence,’ when the next two individuals in the presidential line of succession were unsecured and had to be taken to secure locations, for three hours the President did nothing,” Meijer said.

“I think that was a shameful dereliction of duty,” Meijer said of Trump.

But what is alarming Republicans in Washington is that Meijer’s West Michigan district stands at serious risk of flipping to Democrats, thanks to redistricting which shifted the district from one that Trump narrowly carried to one that Biden won by nine points. In an area once represented by Gerald Ford, Hillary Scholten could emerge as the first Democratic woman to represent the traditionally conservative region — a rare bright spot for their party in a grim midterm environment.

National Democrats have begun pouring money into the race in a bid to prop up Gibbs, despite railing on him and other MAGA Republicans as “too extreme,” a strategy pushed by Democratic leaders who are struggling to maintain their paper-thin House majority.

Gibbs, in the interview with CNN, made claims that could become general election fodder.

As he parroted Trump’s false claims that 2020 election was stolen, he downplayed the fact that there was no evidence to back it up, comparing it instead to the “mafia” — meaning people knew the mob were murderers but there wasn’t evidence at the time to prove it. He claimed most people were peaceful on January 6, 2021, and was sympathetic to those who have been jailed for receiving tough sentences. He said he didn’t know if Trump supporters were the ones who breached the Capitol, while saying “no,” Trump didn’t deserve any blame.

Gibbs suggested they should look “look at everything” about the 2020 election, even if voting machines changed votes, while asserting that House GOP majority should probe it.

As to whether he’s watched any of the hearings from the House select committee on January 6, which have provided evidence of Trump’s role behind the attack and failure to stop it: “No, I haven’t. I’d rather pull my toenails out.”

Gibbs also expressed strong anti-abortion views, saying “it’s really unfair” to “kill a baby” if the mother has been raped, saying she should bring the baby to term and the rapist should be prosecuted. He also argued that saving the life of the mother is often used as a “red herring” since technology exists to save a mother’s life and the baby so it “is not really an issue.” He criticized Meijer over supporting aid to Ukraine, which he believes will lose the war against Russia.

But Gibbs maintained that it was Meijer who was more vulnerable in a general election.

“So there’s a huge amount of just betrayal that people feel on an emotional level, and it’s palpable,” Gibbs said of Meijer.

He added: “If Peter Meijer wins the primary, he can’t win the general,” Gibbs said. “He’s going to lose too much of the Republican vote.”

Yet GOP leaders don’t seem to agree. Even as Trump has stumped for Gibbs, House GOP Leader Kevin McCarthy’s leadership PAC just quietly dropped into $10,000 into Meijer’s campaign, who got the boost of another $5,000 from his super PAC, according to campaign finance records. And while Meijer and his super PAC have run ads promoting his candidacy, Gibbs has yet to run an ad on TV given that he has raised just a fraction of the money as Meijer.

Meijer has criticized Gibbs for moving to West Michigan to run for the seat, something that Gibbs dismisses by pointing out how he was born and raised in Michigan though he worked in Japan and in Washington. And Gibbs singles out Meijer’s vote for bipartisan bills to provide $40 billion aid to Ukraine and stem gun violence. But the impeachment vote stands above the rest of the issues, according to Republican officials.

Despite his financial advantages and hailing from a storied Michigan family — he’s the grandson of Hendrik Meijer, who founded the grocery store chain that bears their name — Meijer, a US Army veteran who served in Iraq, is still trying to explain to voters where he stands.

“I have a lot of folks who start out hostile and then when they have an opportunity to hear a little bit more, they get it,” Meijer said in a boxing gym where he was meeting with voters. “And they say, ‘thank you.’ However, that’s harder to convey in a three quick bullet points, it’s harder to convey in 87 words in a TV spot.”

Gibbs compares lack of ‘rigged’ election evidence to the ‘Mafia’

So far, Trump has won his revenge against some of the 10 House Republicans who voted to impeach him. Four lawmakers — Illinois Rep. Adam Kinzinger, Ohio Rep. Anthony Gonzalez, Michigan Rep. Fred Upton and New York Rep. John Katko — have chosen to retire. South Carolina Rep. Tom Rice lost his primary, and Wyoming Rep. Liz Cheney is encouraging Democrats to vote for her as she polls far behind her Trump-backed challenger Harriet Hageman.

Of the 10, only California Rep. David Valadao has won his primary, where Trump did not endorse. Trump has endorsed challengers to Washington Reps. Dan Newhouse and Jaime Herrera Beutler, but those members could benefit from their state’s open primary system against fractured fields on August 2.

In November, Trump endorsed Gibbs, saying, “Unlike Peter Meijer, he will not turn his back on Michigan.” In April, the former President traveled to Michigan, rallied the faithful and made fun of how to say Meijer’s name. (Meijer said, “It was pretty clear he wasn’t entirely sure who I was by the 92nd digression on how to pronounce my last name,” which rhymes with “fire.”)

When Gibbs first met with Trump in Mar-a-Lago, the first thing the former President said to him: “I didn’t know that you’d be good looking,” according to Gibbs. But he earned Trump’s praise as he embraced the ex-President’s false claims that he actually won the 2020 presidential election.

Asked by CNN whether the election was stolen, Gibbs said, “I do think there was enough shenanigans to change the result, yeah.”

Gibbs said there were “anomalies.” Asked about the conspiracy that voting machines changed the votes in 2020, Gibbs said, “I think we need to look at everything and see what’s going on.” Even though the country’s voter population grew between 2016 and 2020 and vote-by-mail became more prevalent, he claimed, “if a President gets more votes the second time than they get the first time, you always win the election.”

Joe Biden won the 2020 election, a fact affirmed in court and in Congress, and acknowledged by Trump’s attorney general, White House counsel and daughter, among many others. But when confronted with the fact that no evidence of widespread voter fraud ever materialized, Gibbs compared Biden’s victory to a criminal scheme cooked up by the mafia.

“I think one analogy that you could look at here is the mafia,” Gibbs told CNN. “For many years, you could never arrest them. You knew they were throwing guys off roofs and stuff but all you could get them for was tax evasion and money laundering because you don’t quite have the legal and investigative framework in place to catch them.”

Gibbs added: “And just because there’s no convictions and no court cases, that doesn’t mean they weren’t doing stuff. So I think there’s some similarities there with this election stuff we’re seeing. We are working towards, I think, the right kind of legal framework and prosecutorial framework to get to the bottom of it, but we’re still not quite there yet. But I think we will get there, just like they did with the mafia.”

Gibbs also said that Trump was not responsible for the attack on the Capitol and “the vast, vast majority of people behaved perfectly fine” that day while expressing sympathy to those who have been jailed.

“I think there’s some problematic aspects with what’s going on with the prosecutions,” Gibbs said. “But I think, overwhelmingly, what I’ve heard is that the people that were there were peaceful and they were protesting peacefully. So I don’t see President Trump in any way responsible for anything.”

Meijer, who was in the Capitol on January 6, says Gibbs is creating an alternate reality.

“These fictions have consequences,” Meijer said.

“I will say one of the frustrations is … there’s a lot of ‘Well, no, it was either not that bad, or if it was bad, it was an FBI inside plot’ or something else,” Meijer said. “I mean, because the reality I think is so damning that sometimes you need to create an alternate.”

Scholten, who says that she has played no part in the Democratic Congressional Campaign Committee’s strategy to prop up Gibbs, says the candidate has energized the right-flank with those claims.

“I think that Gibbs has certainly fired up a certain portion of the electorate over those claims,” she said. “And I think it’s dangerous.”

Scholten is looking to take advantage of the intraparty fight, and the newly redrawn district, after losing to Meijer in 2020 by six points, yet she too will have to contend with a problem from her party’s leader: Biden and his unpopularity.

Asked if she believes Biden should run for President in 2024, Scholten said, “I’m focused on this race right here right now in Michigan’s Third Congressional District and getting them the representative — the representation that they deserve from here in West Michigan.”

While she criticized Meijer’s position on abortion rights and for voting against Congress’ $1.2 trillion infrastructure bill, she praised his vote to impeach Trump.

“I reached out to him the day of that vote and thanked him,” Scholten said.