Trump and Pence inch toward a 2024 showdown 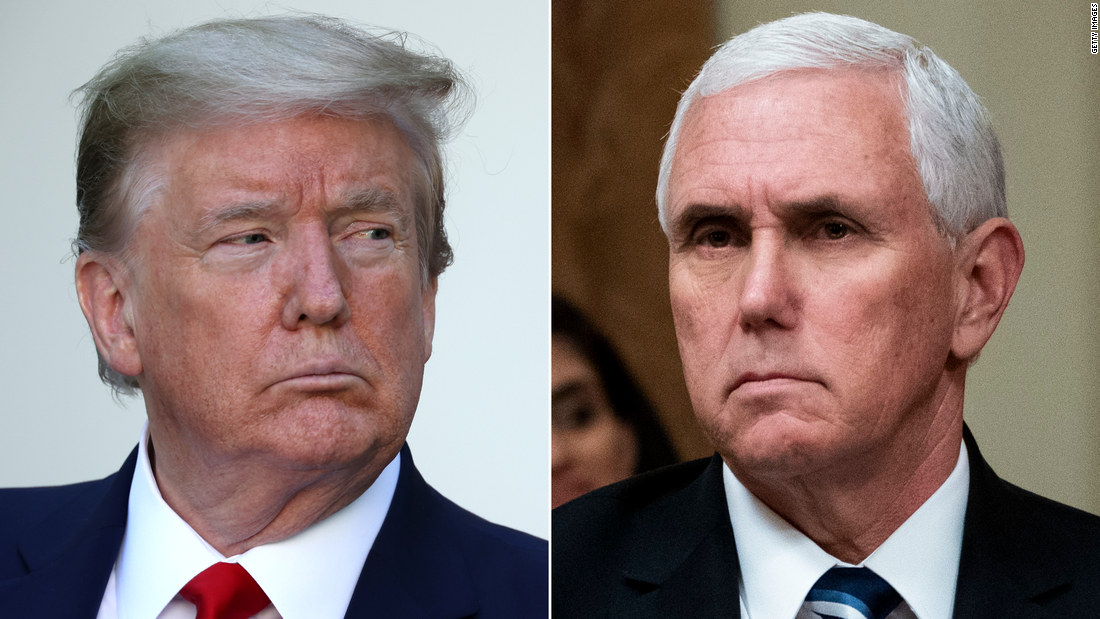 The former President and his former vice president, who is increasingly emerging as a rival, are both in Washington on Tuesday. For Pence, it’s his second visit within a week as he lays the groundwork for a potential 2024 White House bid. And for Trump, it’s his first visit to Washington since he left office a year and a half ago.

The speeches by Trump and Pence come just days after the latest hearing from House select committee investigating January 6, 2021. And their appearances, focused on their diverging visions for the GOP, showcase how that probe is being ignored and dismissed by Republican voters and politicians, as two of the party’s most prominent figures inch toward the 2024 presidential primary.

That dissonance — a party turning its attention to the next presidential race in a city still unraveling how the last one ended — has frustrated the small number of Republicans who want to see the nation reckon with what happened at the Capitol, where rioters spurred by Trump’s lies about election fraud chanted that they wanted to hang Pence over his refusal to reject key states’ electoral votes.

Illinois Rep. Adam Kinzinger, who is one of the two Republicans on the House committee investigating the insurrection, said Tuesday he has been frustrated that potentially criminal acts uncovered by the probe have not led to prosecution by President Joe Biden’s Department of Justice.

But Kinzinger said on CNN’s “New Day” that he was pleased by the revelation that Marc Short, Pence’s former chief of staff, confirmed that he testified last week in front of a grand jury investigating the insurrection.

“There was a lot of frustration, just kind of personally, for the last, I guess, year and a half, like, what’s DOJ doing?” Kinzinger said. “I think our investigation, though it is not a criminal investigation, certainly has brought some things to light that DOJ is watching, and it seems like between that and some of the search warrants that have been served and some of the other things that we have seen, that they are moving forward.”

He added: “I think it’s important for the Department of Justice to get a handle on what the criminality of what happened is, and if there are crimes, to prosecute them. Because we cannot live in a country where we send a message that a president is above the law, as long as he fails at a coup attempt.”

However, Kinzinger’s position appears out of step with the Republican base. The party’s voters have sided with Trump, embracing his lies about the 2020 election being stolen and propping up candidates nationwide who have done the same. And most leading Republicans, even those who have refused to repeat Trump’s falsehoods, have avoided directly confronting the former President.

Trump and Pence were in Washington on Tuesday for speeches that were billed as policy-focused dives into their visions for the GOP.

Pence had initially been scheduled to speak at the Heritage Foundation on Monday, but due to his flight being pushed back by a weather delay, he delivered an abbreviated version on Tuesday that offered glimpses of his differences with Trump. Pence made veiled references to his desire to move past Trump’s lies about the 2020 election outcome and steer the party toward what he called a “freedom agenda.”

“Now some people may choose to focus on the past,” he said. “But elections are about the future. And I believe conservatives must focus on the future to win back America.”

But the divide between the erstwhile running mates was on the mind of the crowd of young conservatives. When asked about the divide by an audience member Monday, the former vice president downplayed the idea there was any break within the broader conservative movement, saying he “couldn’t be more proud of the record of the Trump-Pence administration.”

But Pence did acknowledge a difference in “focus” between himself and Trump.

“I don’t know that the President and I differ on issues, but we may differ on focus,” Pence said. “I truly do believe that elections are about the future. And it is absolutely essential, at a time when so many Americans are hurting, so many families are struggling, that we don’t give way to the temptation to look back. But I think the time has come for us to offer a bold and positive agenda to bring America back, and I’ll continue to carry that message all across this nation.”

Pence is also writing a book that is slated to be published in November and will cover “President Trump’s severing of their relationship on January 6, 2021, when Pence kept his oath to the Constitution,” according to publisher Simon & Schuster.

Other Republicans have downplayed Pence’s influence within a GOP where Trump remains the dominant figure, and have said there is no constituency for him in a 2024 presidential race.

“Our America is proudly ultra MAGA, not some low energy roadside RINO safari,” said Gaetz, referring to a derogatory term for so-called moderate Republicans. “On that note, let me just say what everyone here knows: Mike Pence will never be president. Nice guy, not a leader.”

Meanwhile, Republicans’ broad rejection of the House panel investigating January 6, 2021, has been on display on the 2022 midterm campaign trail — and particularly at rallies Trump has hosted for candidates he has endorsed in key primaries, most of whom have sided with his calls for states to reverse their 2020 results and make voting harder by imposing new restrictions on mail-in voting, drop boxes and more in future elections.

“I think they’re a bunch of bulls***,” Wanda Schoenberner, a Trump supporter who attended his rally over the weekend in Arizona, said of the January 6 hearings.

“Do you have both sides, or are you getting one side of the story?” she said. She claimed that the insurrection was “an inside job.”

Trump, in his first trip to Washington since leaving office on January 20, 2021, is delivering the keynote speech at a summit hosted by the America First Policy Institute, a group that could serve as a campaign-in-waiting of sorts to develop a platform for a 2024 presidential run.

Trump’s speech is expected to focus on “law and order,” according to Trump spokesman Taylor Budowich.

“President Trump sees a nation in decline that is driven, in part, by rising crime and communities becoming less safe under Democrat policies,” Budowich said. “His remarks will highlight the policy failures of Democrats, while laying out an America First vision for public safety that will surely be a defining issue during the midterms and beyond.”

Trump allies tell CNN they hope former President will use the speech to look forward and focus on setting a Republican agenda ahead of the midterms. As Trump has publicly teased a 2024 bid, aides and advisers have encouraged him to move on from the 2020 election and shift focus to policy that they believe could put him back in office, like the economy, school curriculum and crime.

So far, Trump has yet to change course, instead using speeches to claim that the 2020 election was rigged, criticizing Republicans that he views as disloyal and attacking the select committee. One source close to Trump expressed frustration that the former President seemed unable to stop obsessing over the past, concerned it would hurt his chances in a 2024 presidential campaign.

One thought on “Trump and Pence inch toward a 2024 showdown”