Toddler mauled by pack of puppies: Is ‘littermate syndrome’ to blame? Vets say probably not 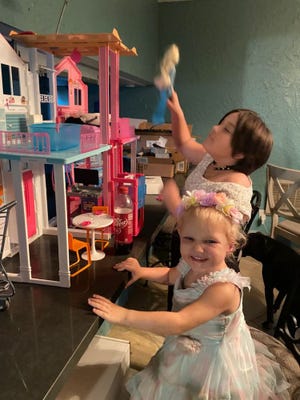 A California toddler is recovering after her family’s pack of puppies mauled the girl this month, gravely injuring her, family members say.

On the day of the attack, 2-year-old Felicity Peden was outside with the family’s four 12-week-old puppies and her parents as the family prepared for a party, the child’s mother, Sierra Michele Peden, told USA TODAY Wednesday night.

Peden said the family adopted the mixed-breed pups in May after moving to a new home in Onyx, about 60 miles northeast of Bakersfield. She said she was told they were “some sort of Queensland Labrador, Red Heeler Pit Bull mix.”

“We had them for weeks and they’d never given us any issues with the children,” Peden said.

The mauling took place June 3, Peden said, while the girl’s father was working in the yard and her three older sisters were inside watching the family’s baby.

Peden said after leaving the backyard, she left their home to run an errand while her husband stayed home with Felicity and her older sisters, ages 13, 11, and her 1-year-old brother. Minutes later, she got a call and learned her husband was racing Felicity to a hospital.

“He said, ‘I found Felicity unconscious laying under a tree! I think she’s missing an eye!’ Peden recalled.

Felicity, who suffered injuries to her face, neck and upper body, was taken by medical helicopter to Valley Children’s Hospital in Madara where she underwent three hours of surgery.

She said Kern County Sheriff’s Office Deputies responded to their home after being alerted about the attack.

“The cops sat out here for 15 minutes with us trying to find it,” she said. “Even the doctors told us they thought it was puppy play because if they were really attacking her there would be chunks missing from her, but they were just scratches and bite marks.”

Peden said Felicity was recovering at a quick pace.

Is ‘littermate syndrome’ to blame?

In a post on a fundraiser page created earlier this month by Felicity’s grandmother, Linnea Hooker of Las Vegas, Felicity’s family blamed “littermate syndrome” on the attack, which refers to a “host of behavioral issues that tend to present when canine siblings (littermates) are raised in the same household beyond the normal 8 to 10 weeks of age, when puppies are usually placed in separate homes.”

Her mother said she learned about “littermate syndrome” online before the family surrendered the puppies to animal control.

“I heard from someone on Facebook about littermate syndrome and I had never heard of it so I looked it up on Google and then when animal control came out she was explaining that sometimes when more then one puppy is in the home they start to exhibit pack like behaviors,” Peden said. “I asked my follow up questions and told her everything that happened and that I researched it and… she agreed. They didn’t diagnose the animals with it they just explained what can sometimes happen when they aren’t separated to bond with their owners.”

However, some veterinarians on Wednesday pushed back, saying the so-called syndrome is probably not the cause of the attack.

“This situation is very sad – but the puppies’ reasons for attacking the little girl are not likely to be as simple as a littermate “syndrome,” Veterinarian Liz Stenlow, chief of behavior service at University of California, Davis told USA TODAY on Wednesday.

Reisner Veterinary Behavior & Consulting Services, a veterinary behavior specialty practice that works with to pet owners and veterinarians in the Pennsylvania, New Jersey, and Delaware regions, posted on Facebook Wednesday that “whoever coined ‘littermate syndrome’ as its own disorder with unique, abnormal characteristics’ was very imaginative.”

“It doesn’t exist in behavioral reality,” the practice posted, adding there are more grounded explanations for what might have happened.

“I’ve found no literature to support “Littermate Syndrome,” Stenlow said Wednesday. “Nothing I’ve read precludes this from being a play interaction that became either overly rough or predatory in nature. This is a reasonable possibility for the behavior of four puppies acting together.”

Stenlow said she has personally had littermates as patients that became aggressive toward each other – but it happens with equal regularity in households with unrelated dogs living together. She also said she has not seen sibling relationship between dogs affect interactions with people in the home.

Another thing to consider about the concept is the puppies were reportedly only 12 weeks of age – too young to be exhibiting any stress from being kept together, Stenlow said.

Many dog owners aren’t aware of the body-language signals that their dogs display, Stenlow said, making them fairly unreliable when they say things like the puppies gave them no reason not to let the children play with them.

“These parents very obviously did not mean to leave their toddler unsupervised with these puppies – but this sad situation is a prime example of why not to,” Stenlow said.

Natalie Neysa Alund covers trending news for USA TODAY. Reach her at nalund@usatoday.com and follow her on Twitter @nataliealund