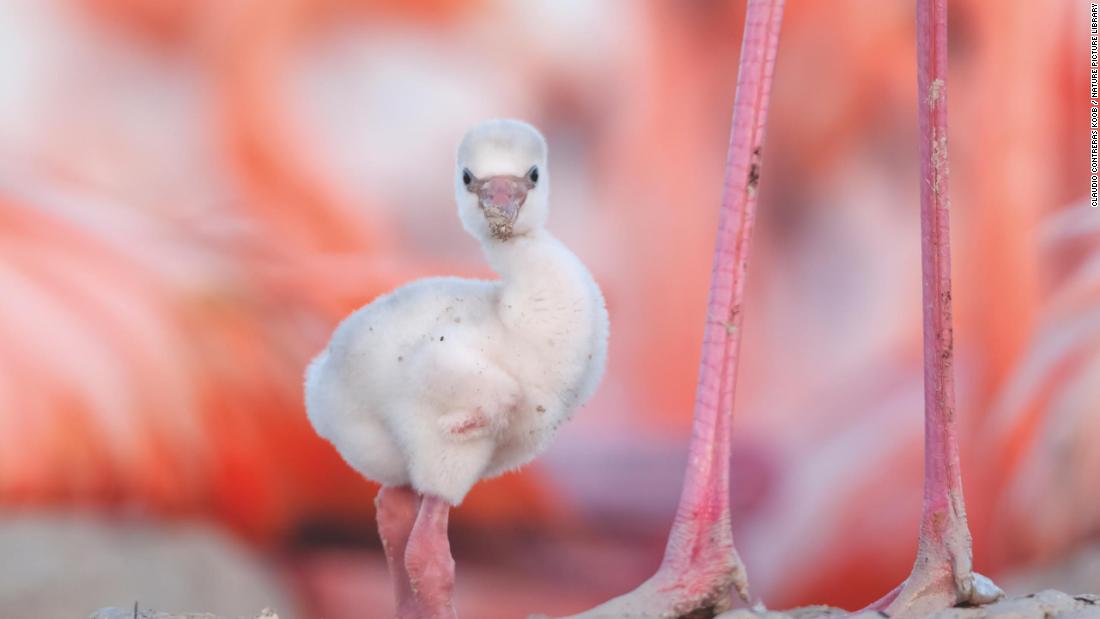 Since he was four years old, photographer Claudio Contreras Koob has been obsessed with flamingos: their vibrant pink feathers, horn-like curved beaks, and elegant, poised necks.

Born and raised in Mexico City, Koob visited the Yucatán Peninsula every year during school holidays. His father built a house on sand dunes in the port village of Chuburná, between the sea and wetlands, and together they watched flamingo colonies gather in the lagoons and muddy swamps that stretched for miles behind the house.

“It was a very beautiful sight when we were able to spot a pink-orange mass of birds in the distance,” says Koob. “That stayed in my memory.”

The Caribbean flamingo is “emblematic” of the Yucatán Peninsula, where his father is from, says Koob, appearing on beach towels, pool inflatables, garden furniture, and even on packaging for pink salt. But despite its popularity, in Yucatán and beyond, little is known about its movements and biology, he says.

The Caribbean flamingo lives in salty wetland and coastal waters around Mexico, the US and the Caribbean. Credit: Claudio Contreras Koob / Nature Picture Library

Now, decades after his first sightings of this “iconic bird,” Koob is sharing his passion in a new photography book, “Flamingo,” published last month.

Koob hopes his intimate portraits of the bird will help others to “fall in love with flamingos” and inspire them to care about the wetlands where they live.

From lab to lens

Koob’s childhood fascination with nature led him to study wildlife biology at the National Autonomous University of Mexico, where he took a course in microphotography and discovered “what the language of photography could do,” he says.

Combining his passions, Koob focused on conservation photography when he left university. He joined the International League of Conservation Photographers which in 2009, asked him to capture the tagging of flamingo chicks in Yucatán.

With the support of Mexico’s Flamingo Conservation Program, run by Fundación Pedro y Elena Hernández since 2015, Koob spent several years collecting the images that make up his book. He says the biggest challenge was getting close to breeding birds.

“If you disturb one, they start screaming and flying away, and you can cause a panic. They could leave all the eggs, and abandon the colony,” says Koob.

Koob spent years gaining the trust of the flamingos so that he could photograph their nesting colonies and young chicks. Credit: Claudio Contreras Koob / Nature Picture Library

Koob says his “slow approach” to photography enabled him to gather intimate images of the flamingos. He often wore camouflage, army crawling across muddy ground to get close to the birds without scaring them.

On some occasions, he took a boat into the lagoons before dawn so the birds would be accustomed to his presence by sunrise, and stayed until after nightfall. “That is tough, with the sun and 40 degrees (heat),” says Koob. “It’s very consuming for the body.”

Unlike humans, flamingos are well adapted for their extreme environment.

Gathering in groups known as a flamboyance, flamingos typically live in brackish water, but some inhabit alkaline “soda lakes” filled with water so high in sodium carbonate it would irritate or burn the skin of most animals.

Flamingos use their hooked beaks to feed on shrimp, mollusks and algae that are rich in carotenoids, the pigment that gives them their pink coloring. Credit: Claudio Contreras Koob / Nature Picture Library

Here, the flamingos encounter few predators or other birds that would compete for food. Flamingos need to consume 10% of their bodyweight daily, says Koob — so having long, undisturbed feeding times is important.

Their diet comprises algae, shrimps and mollusks containing large amounts of carotenoids — the same pigments that give fruits and vegetables like carrots, pumpkins, and tomatoes their coloring — and which are responsible for the flamingo’s signature hot-pink appearance, says Koob.

Flamingo conservation has been a high priority for Mexico since the 1970s and ’80s, when it established two federal wetland reserves on the Yucatán peninsula, later designated as UNESCO Biosphere Reserves.

Ría Lagartos to the east is where the flamingos nest and breed, while on Yucatán’s western border, Ría Celestún is an important feeding site. Additional reserves established by the local Yucatán government mean that almost all the peninsula’s wetlands are protected, says Koob.
Flamingo numbers have been increasing since the establishment of the parks, say Koob. Based on the number of nests at the breeding colony in Ría Lagartos, the National Commission of Natural Protected Areas (CONANP) estimates there were around 30,000 adult birds in 2021.
But these reserves don’t offer complete protection, he says. Agrochemicals used in highland regions flow through underwater river systems and pollute the wetlands, and while the reserves are supposed to be protected from urban development, Koob says there are still instances of illegal building and trash disposal.

Up to 50,000 tourists come to see the flamingos every year at Ría Celestún (pictured) — although Koob warns that this could disrupt their eating habits. Credit: Claudio Contreras Koob / Nature Picture Library

Climate change and rising sea levels threaten flamingo habitat, and tourism also has an impact. While the nesting colony is closed to tourists, up to 50,000 visitors come to see the flamingos in Celestún every year which can disrupt their eating habits. Authorities have introduced regulations to limit the numbers of tourists, says Koob, adding that it’s too early to know if the caps will be sufficient.

Now, Koob is back in Yucatán, staying in his childhood holiday home in Chuburná, photographing the wetlands. This time, horseshoe crabs are his focus, and he hopes he can continue to draw more attention to the wildlife and communities living there.

“For most people, the wetland is like a stinky, dark, creepy place. But it’s full of wonders — and the flamingo is just one of them,” says Koob.