The Painful Path to Fight Inflation 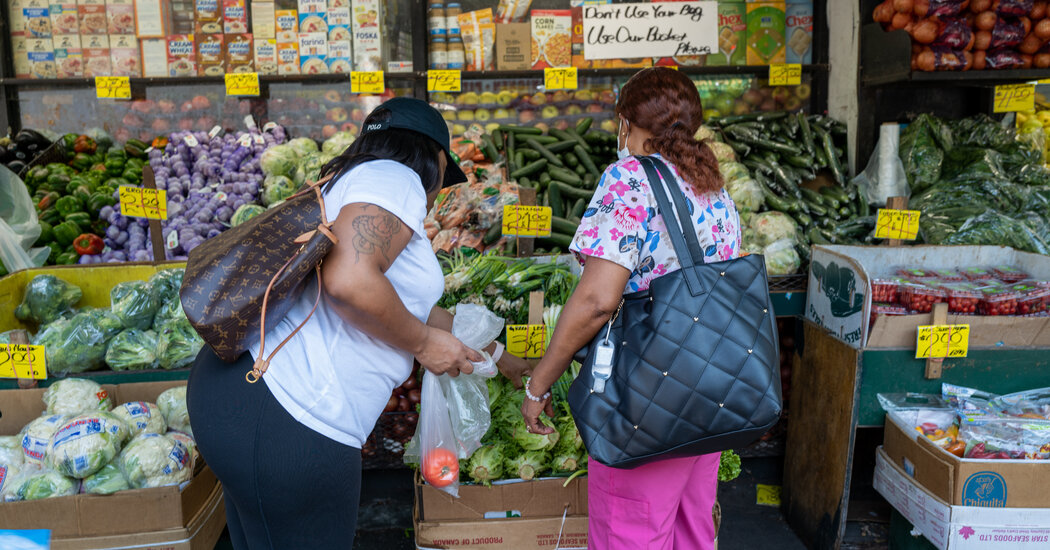 Americans’ household finances are headed for a rough patch.

Consumer prices are climbing at the fastest pace since 1981, and given the breadth of today’s rapid inflation — which is showing up in costs as diverse as airfares and apartment rents — it is unlikely to fade fully on its own. The government’s efforts to wrestle it down will most likely prove painful for many working families.

The country’s main tool for fighting price increases is Federal Reserve policy. The Fed is trying to bring inflation back under control by raising interest rates, which sets off an economy-cooling chain reaction. Higher interest rates increase the cost of mortgages and company borrowing, which slows business growth and translates into less hiring. As the job market weakens, paycheck growth slows, which further tamps down buying. Less shopping gives supply a chance to catch up.

The challenge for many working families is that their wages might slow down before price increases do. Fed officials predicted last week that unemployment would begin creeping up by the end of the year but that inflation would remain elevated at 5.2 percent.

That means that consumer buying power is likely to erode, after several months in which wage growth has already failed to keep up with rising prices. At the same time, rising rates have unsettled markets and prompted stock prices to plummet, chipping away at many household nest eggs. Higher mortgage costs are slowing the housing market and could lower home values, further cutting into wealth — because for many families real estate makes up a big chunk of net worth.

As incomes and household balance sheets take a beating, many Americans may wonder: Isn’t there a better way to deal with inflation? Today, I will explain why policymakers are choosing this painful path.

Prices generally jump when consumers and businesses demand more goods and services than companies are able, or willing, to supply. To use a recent example, demand for cars bounced up last year, but car companies could not ramp up production fast enough to meet the surge amid a parts shortage. As shoppers competed for a finite supply of sedans and pickup trucks, prices skyrocketed.

Fed policy works on the demand side of that equation. When fewer people shop for cars, because auto loans are expensive and the job market feels less secure, a smaller supply of vehicles might be enough to go around without causing prices to shoot up.

But crushing demand ranks somewhere between unpleasant and agonizing. When the Fed pushed interest rates to double-digit levels in the early 1980s, in an effort to bring down rapid inflation, it set off brutal back-to-back recessions that pushed the unemployment rate to nearly 11 percent. (Right now, the rate is at a historically low 3.6 percent.)

That grim historical example has prompted some labor-focused groups to call for a more holistic response to today’s price increases, which are the result of both strong demand and disrupted supply.

The White House and Congress could help to ramp up production in key parts of the economy, offering relief on the supply side of the inflation equation.

The issue is partly one of timing. While the government can try — and is trying — to help build more affordable housing, for instance, those policies take a while to have an effect. By the time they help, consumers and businesses may have come to expect fast inflation. And with prices, expectations can be self-fulfilling: Workers who anticipate heftier rent and grocery bills might demand higher pay to cover those costs, prompting their employers to raise prices to cover climbing labor expenses and setting off an inflationary cycle.

That is one reason the Fed is stepping in with its painful, but quicker, tool.

The Fed last week lifted interest rates by the largest increment since 1994, while signaling that it expects to raise them more this year than it did over the entire economic expansion stretching from 2009 to 2020.

Even if it doesn’t cause a full-blown recession, the Fed’s approach is expected to hurt, and it’s already tanking stocks. But officials contend that allowing inflation to go unchecked would be worse, in part because it would stoke uncertainty and hurt low-income people with limited wiggle room in their budgets.

For the past two years, P.S. 11, an elementary school in Brooklyn, struggled to move its music program online, just as the pandemic interrupted critical years for children’s musical development.

The budding musicians made do with practicing in their living rooms, on their fire escapes, in their grandparents’ basements. Those who left their instruments at school watched from the sidelines as their peers tried to keep time with each other over Google Meet.

Now, the music is back at P.S. 11. At a recent rehearsal, despite clarinet squeaks and the occasional bleat of a rogue saxophone, almost every student was smiling, Sarah Diamond reports in The Times. “It’s not about trying to create a little Mozart,” Roshan Reddy, the band director, said. “It’s about students finding their own strength.”

See the P.S. 11 band in action, and hear from the students. — Natasha Frost, a Briefings writer