The administration would exchange Viktor Bout, who is serving a 25-year US prison sentence, as part of a potential deal for the two Americans 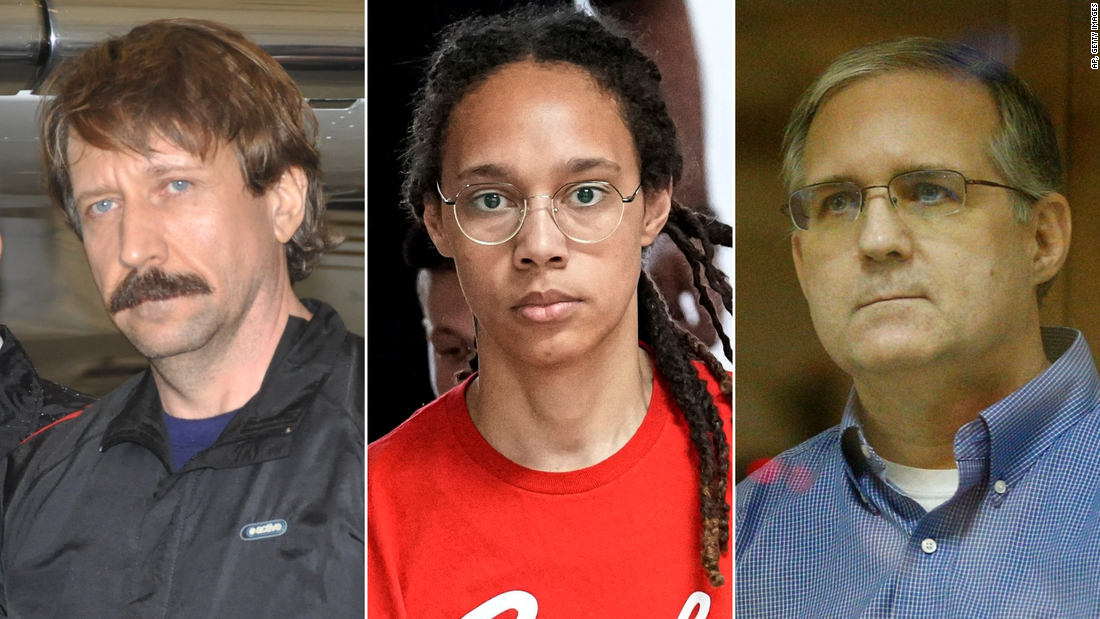 These sources told CNN that the plan to trade Bout for Whelan and Griner received the backing of President Joe Biden after being under discussion since earlier this year. Biden’s support for the swap overrides opposition from the Department of Justice, which is generally against prisoner trades.

“We communicated a substantial offer that we believe could be successful based on a history of conversations with the Russians,” a senior administration official told CNN Wednesday. “We communicated that a number of weeks ago, in June.”

The official declined to comment on the specifics of the “substantial offer.” They said it was in Russia’s “court to be responsive to it, yet at the same time that does not leave us passive, as we continue to communicate the offer at very senior levels.”

“It takes two to tango. We start all negotiations to bring home Americans held hostage or wrongfully detained with a bad actor on the other side. We start all of these with somebody who has taken a human being American and treated them as a bargaining chip,” the official said. “So in some ways, it’s not surprising, even if it’s disheartening, when those same actors don’t necessarily respond directly to our offers, don’t engage constructively in negotiations.”
Secretary of State Antony Blinken announced Wednesday that the US presented a “substantial proposal” to Moscow “weeks ago” for Whelan and Griner, who are classified as wrongfully detained. The top US diplomat said he intended to discuss the matter on an expected call with Russian Foreign Minister Sergey Lavrov this week.

The families of Whelan, who has been held by Russia for alleged espionage since 2018, and WNBA star Griner, jailed in Moscow for drug possession since February, have urged the White House to secure their release, including via a prisoner exchange if necessary.
Griner, who pleaded guilty in early July but said she unintentionally brought cannabis into Russia, testified in a Russian courtroom Wednesday as part of her ongoing trial on drug charges, for which she faces up to 10 years in prison. It is understood that her trial will have to conclude prior to a deal being finalized, according to US officials familiar with the Russian judicial process and the inner workings of US-Russia negotiations.

During months of internal discussions between US agencies, the Justice Department opposed trading Bout, people briefed on the matter say. However, Justice officials eventually accepted that a Bout trade has the support of top officials at the State Department and White House, including Biden himself, sources say.

The US government has long resisted prisoner swaps, claiming concerns that they only incentivize countries to detain Americans so they can be used as bargaining chips. Advocates have questioned these concerns and have argued that it is more important that Americans are able to come home.

Among senior Biden administration officials, the idea of prisoner swaps gained new momentum earlier this year after the successful release of Trevor Reed, a former Marine who was held captive in Russia for more than two years. Reed was traded for Konstantin Yaroshenko, a Russian pilot then serving a 20-year federal prison sentence for cocaine smuggling conspiracy.

Biden officials had been concerned the decision to swap Reed for Yaroshenko would be criticized by Republicans. Instead, it won bipartisan praise, including from a handful of Republicans who are normally sharp critics of the administration. That reception, sources say, led the administration to reexamine all options — including potential swaps — to get Whelan and Griner out of Russia.
“Whatever the kind of moral indignity of them holding innocent people and trying to extract from us someone like a Mr. Yaroshenko, who is the opposite of that, we nonetheless are so committed to bring our people home that we will make those painful choices in certain circumstances,” the senior administration official told CNN.

Securing their release would also give the White House a much-needed political win ahead of the midterm elections in November, a point that some officials quietly acknowledged when speaking privately to CNN. There is also a sense of urgency to bring the two detainees home as the White House faces growing public scrutiny from the families of Americans unlawfully detained abroad.

One thought on “The administration would exchange Viktor Bout, who is serving a 25-year US prison sentence, as part of a potential deal for the two Americans”