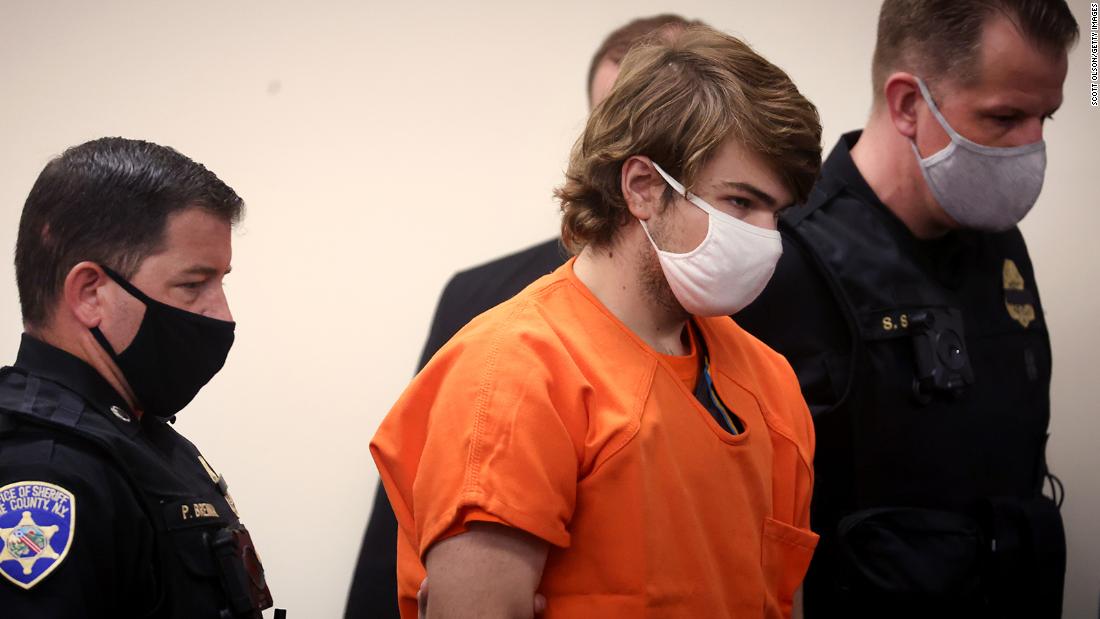 The charges against the White suspect came as Attorney General Merrick Garland visited the site of the massacre and met with families of the victims.

“No one in this country should have to live in fear that they will go to work or shop at a grocery store and will be attacked by someone who hates them because of the color of their skin,” Garland said after meeting with family members.

A criminal complaint filed by prosecutors in the US Attorney’s Office for the Western District of New York states that, “Gendron’s motive for the mass shooting was to prevent Black people from replacing white people and eliminating the white race, and to inspire others to commit similar attacks.”

Gendron is accused of shooting 13 people, ages 20 to 86, at the Tops Friendly Market on May 14. Eleven were Black and two were White, Buffalo police said.

The latter three counts carry the potential of the death penalty.

Garland, who has put a temporary hold on federal executions while the department reviews policies and procedures, would have to make a decision on whether to seek the death penalty.

Asked whether federal prosecutors will seek the death penalty in this case, Garland said, “The Justice Department has a series of procedures it follows … The families and the survivors would be consulted.”

CNN has reached out to attorneys for Gendron for comment.

Garland, Associate Attorney General Vanita Gupta and Assistant Attorney General for Civil Rights Kristen Clarke visited the memorial adjacent to the supermarket for about 10 minutes on Wednesday. Garland laid 10 roses at the site, one representing each person killed.

“In the days and weeks since the attack, we have all witnessed the strength of this community’s bonds, its resilience, and its love,” Garland told reporters. “I am humbled to have just felt that firsthand in my discussions with the families. Hate-fueled acts of violence terrorize not only the individuals who are attacked, but entire communities. Hate brings immediate devastation and it inflicts lasting fear.”

During a search of the gunman’s home, federal authorities found a laptop with a document that stated that Gendron had allegedly been planning the attack for years but that he “actually got serious” about the attack in January, according to the complaint.

In the document, Gendron allegedly called himself a White man “seeking to protect and serve my community, my people, my culture, and my race” and said he has never been diagnosed with a mental disability or disorder. He allegedly stated that his goal was to kill “as many blacks as possible” and to “avoid dying.”

In a handwritten note found by agents in his bedroom, Gendron apologized to his family for committing “this attack” and said he did it because he cared “for the future of the White race,” the complaint said.

During the rampage, Gendron aimed his rifle at a White employee of the supermarket who had already been shot in the leg, the complaint said. Instead of shooting him, Gendron said “sorry” to that victim “before moving on through the rest of the store in search of more Black people to shoot and kill,” according to the complaint.

Gendron visited the store the day before the attack and again, two and a half hours before he allegedly began shooting, the complaint said.

The complaint described how multiple customers and employees “took shelter in a stock room, a conference room, a freezer and a dairy cooler” while others fled through a rear door.

The gunman unleashed about 60 shots during the attack, according to the complaint.

On June 1, a grand jury in New York returned a 25-count indictment against Gendron. He is facing 10 counts of first-degree murder, 10 counts of second-degree murder as a hate crime and three counts of attempted murder as a hate crime, according to court documents. Gendron is also facing a charge of domestic terror and a weapons charge, according to court documents. He pleaded not guilty to the indictment.

The suspect arrived at the supermarket on the afternoon of May 14 heavily armed and wearing tactical gear — including a tactical helmet along with plated armor, police said. He also had a camera that was live streaming his actions.

When he entered the store, he exchanged fire with an armed security guard, who authorities said was a retired Buffalo police officer. The security guard died of his injuries. The suspect shot eight more people in the store, six of whom died.