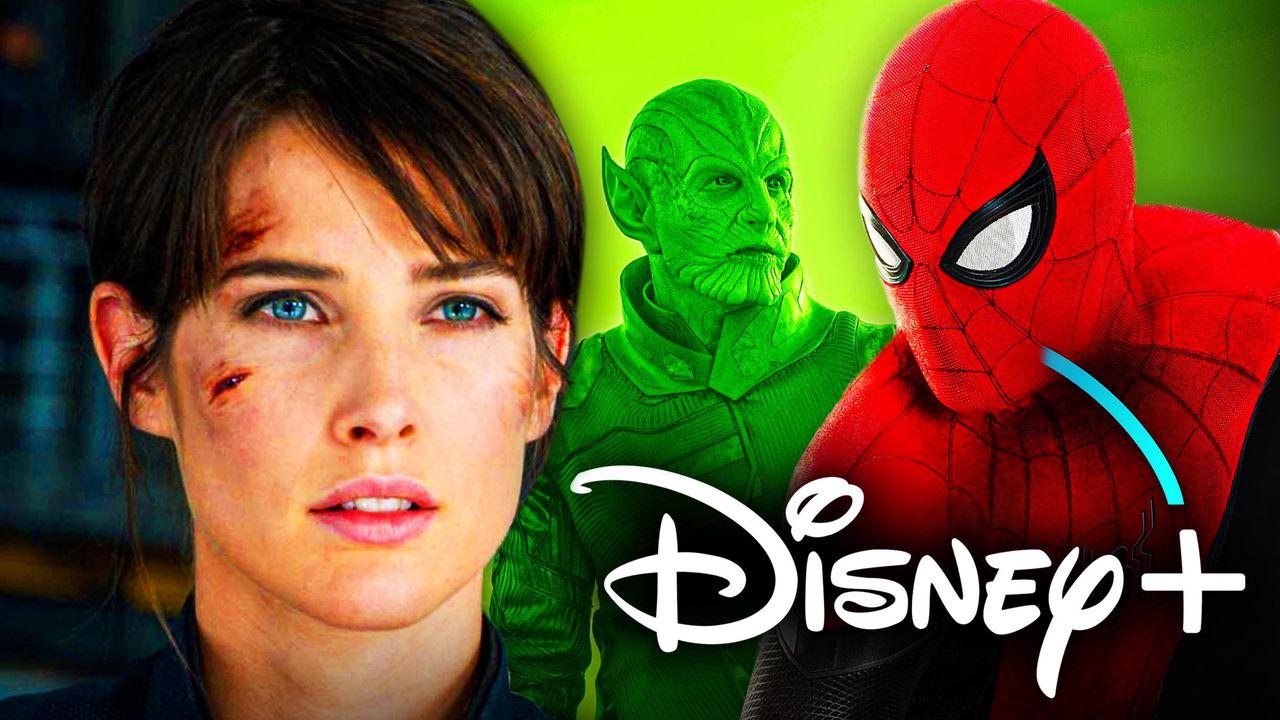 Spider-Man: Far From Home not only officially closed out the Infinity Saga, but it also set the stage for some of the Multiverse Saga’s biggest early movies and TV shows. Specifically, that sequel’s post-credits scene set the stage for what will now be Phase 5’s first Disney+ show in Secret Invasion, after the Skrull leader Talos revealed himself to be on Earth.

Talos will now reunite with his Captain Marvel “partner,” Nick Fury, as the two learn about what the Skrulls are doing on Earth and how they’ve blended in to accomplish their undisclosed mission. Fans will see plenty of ramifications from that Far From Home post-credits scene, which placed Nick Fury off-planet for at least a year and set up an Earth where nobody knows who’s a friend and who’s a foe.

That post-credits twist set up the mystery of where in the universe Nick Fury is but also Maria Hill after Talos’ wife, Soren, simmed Hill and helped Peter Parker defeat Quentin Beck/Mysterio.

Now, Cobie Smulders is back to play Hill once again in Secret Invasion, and she recently previewed how fans can expect to see her return for her first Phase 5 appearance.

Speaking with Brandon Davis of the Phase Zero Podcast, Secret Invasion star Cobie Smulders went into details about the footage from the show that played at San Diego Comic-Con 2022.

When asked about the “claustrophobic” vibe of the show, Smulders teased how the Skrulls have been building their numbers “since we last saw them in Captain Marvel.” With those numbers building, there’s also a growing sense of distrust between them and the humans:

Davis: “Tell me where Maria Hill is at in that [footage], because it just looks like a really claustrophobic, don’t-trust-anybody, kind of vibe.”

Smulders: “Yeah, it is that. 100%. I mean when we think about the world that they’re in, the Skrulls have been around since we saw them in Captain Marvel. They’ve been building in numbers. And are they good? Are they bad? We’re gonna find out in the show. But there’s certainly a lot of them and so it sort of turns into this, ‘Can I trust you? Can I not trust you?’ And it’s really cool. It’s certainly fraught with a lot of tension.’

Smulders also dove into the relationship between Hill and Nick Fury, which hasn’t been good since they last saw each other in Avengers: Infinity War and Avengers: Endgame. With Hill now mostly on her own, her confidence has grown immensely, but she also sees how rough things are going for Fury when they reunite:

Davis: “And the relationship between Maria and Nick Fury looks like it might be a little strained.”

Smulders: “It’s tentative. I think that Maria Hill thinks she can do anything.”

Smulders: “So far, she’s doing okay… She’s handled a lot for just a puny human… But I think she can see how broken this man is from loss, and past experiences that she has a lot of concern about.”

Smulders looked at her history with the franchise, having been a part of the MCU for a decade after starting in 2012’s The Avengers. She shared how much she always enjoys being able to come back, praising Marvel for its work and allowing shows like Secret Invasion to dive into “a different side of these characters” with each new story:

Davis: “Now you’ve been with this franchise for more than a decade now… I mean congratulations. It’s really cool to see you getting such a big role in Secret Invasion and you’ve been in so many films along the way. What has been the biggest surprise since Avengers rolled around and you got to explore this character in various titles with various people.”

Smulders: “Yeah, I mean they just keep asking me to play. Like, I’ll get a call, and they’re like, ‘We’re thinking about you doing this…’ I mean the Spider-Man thing was such a lovely surprise and that’s a cool thing that they’re doing here at Marvel, where the stories are kind of overlapping like they do in the comic books, you know? And being able to do a series like Secret Invasion is… you’re allowing the audience to sit with these characters more in situations that aren’t so intense. We’re able to see these characters chat around the water cooler. What’s that conversation like when you’re sitting in the safe house waiting for information about the bomb? What is that like? It’s much more human and you get to see a different side of these characters, so that’s been exciting to explore.”

Hill also admitted that she had no idea about the Skrull twist from Spider-Man: Far From Home, sharing how much of a surprise it was for her to see on screen:

Davis: “Back when Spider-Man: Far From Home dropped, I’d love to know, did they tell you the Skrull twist?”

Smulders also spoke with Entertainment Tonight to hype up the Skrulls’ return in Secret Invasion, hinting that fans are about to learn just how important their presence on Earth is:

“The Skrulls are here. They’re here, baby, and they want to stay. We got introduced to them in Captain Marvel, which was in the ’90s. And they’ve been sort of percolating into our planet and they’ve been taking human form, so we haven’t really known the magnitude of their presence. But we’re learning that in the series.”

To close, she looked back on Fury having “a really long history with the Skrulls” and how he “feels responsibility towards them” and “feels like he owes them a debt,” which leads to things becoming “really, really complicated.”

Secret Invasion has already been teased as one of the MCU’s darkest and most mysterious projects to date, taking the thriller themes from past movies to new levels of intensity. It appears that Spider-Man: Far From Home was just the start of that, as this series reunites Nick Fury and Maria Hill for their fifth MCU appearance together, this one more tension-filled than ever.

After the Skrulls were first introduced in Captain Marvel, it was clear that they could be one of the most dangerous alien races in the universe with their pronounced shape-shifting abilities. Having already seen the effects of political infiltration in movies like Captain America: The Winter Soldier, Secret Invasion can now take that theme even further as the Skrulls use Earth for their own gain.

Even though Fury and Talos will be the central focus of this series, Maria Hill will be as important as anyone to look after, especially with some of the action from her already seen in set videos. Her relationship with Fury will be another key plot point to watch as they reunite for the first time in more than five years, and Smulders is ready to see how fans react to such a deep new part of the story.

Secret Invasion will begin streaming on Disney+ in Spring 2023.