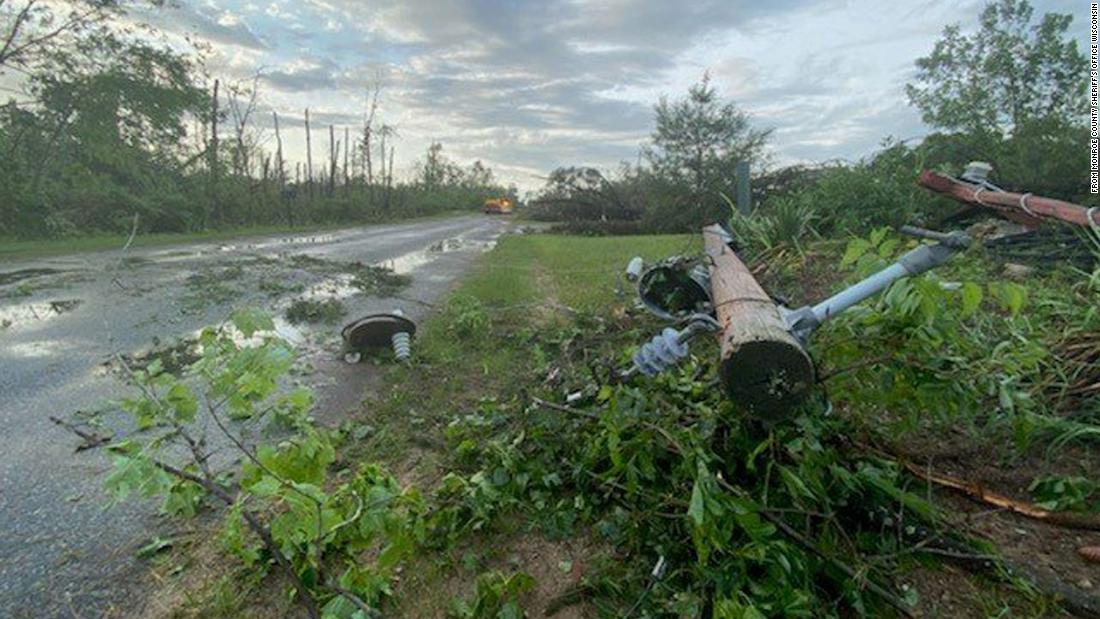 The tornado was reported near Tomah, Wisconsin, just after 4 p.m. local time and apparently traveled northeast through Monroe County for about 15 miles, according to the county’s sheriff’s office.

Interstate 90 was closed for more than three hours due to trailers being blown onto their sides, but no deaths or major injuries were reported.

“The tornado took down multiple trees, power lines, and barns,” the county’s sheriff’s office wrote in a Facebook post. “There is wide spread power outage and damage to a number of homes as well.”

In the meantime, officials are asking people to avoid the area because many roads remain impassible and littered with debris from the damage.

Tomah is about 100 miles northwest of Madison, Wisconsin.

As of late Wednesday, more than 130,000 homes and businesses in Wisconsin were in the dark following the storm, according to PowerOutage.us.

Mile Bluff Medical Center in Mauston, Wisconsin, said a storm passed through its area and damaged trees and vehicles, though the facility experienced minor damage. The storm also prompted patients, residents and staff members to shelter in place as the storm passed.

“We are currently running on back-up power, which allows us to safely care for all patients and residents who are currently in our facility,” the medical center wrote in a Facebook post, adding power was expected to be restored in the evening.

And while the medical center doesn’t anticipate appointment interruptions Thursday, it noted access to its emergency room is limited.

In Columbia County, the sheriff’s office said there were 68 reports of downed trees and power lines on roadways throughout the county. A “couple” of homes also saw some damages, officials noted.
“There are numerous roads that are impassible because of these hazards,” the office said.
The tornado swept through as parts of the state as well as the Midwest grapples with a simmering heat wave and the aftermath of severe storms from earlier this week. On Tuesday, the heat index reached 108 degrees Fahrenheit at Milwaukee Mitchell International Airport, the National Weather Service said.
Meanwhile, the severe storms moving across the Upper Midwest and the Ohio River Valley Monday left about 150,000 homes and businesses without power as of 11:50 p.m. ET across Ohio, Michigan, Indiana, West Virginia, Alabama and Georgia, according to PowerOutage.us.