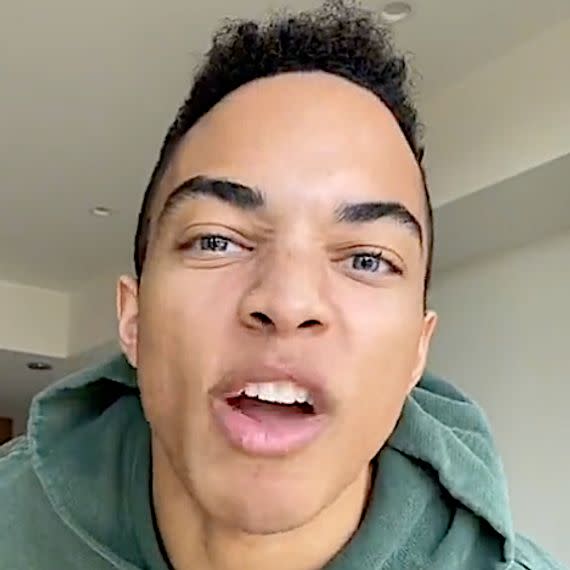 Wild rants by Herschel Walker’s son about absentee baby daddies are going viral on Twitter just as his Republican Senate candidate dad is trying to explain how he has a few other children the public didn’t know about.

While Christian Walker, 22, has been angrily preaching to baby daddies to “control your thing” on TikTok videos, his dad has admitted he has two other sons and a daughter with other mothers.

Walker, a Heisman Trophy winner and former NFL star who’s been endorsed by Donald Trump in his campaign against Rep. Raphael Warnock (D-Ga.), has often spoken out publicly against children being raised in fatherless households, which he has called a “major, major problem.”

“Get home and raise your kids!” says an angry Christian Walker in one of his video messages early this week, targeting “Wild N’ Out” host Nick Cannon. “And take care of the women you’re knocking up! Can you control your thing for three seconds?”

He had a similar eruption weeks ago on the same topic.

“Fathers, it would be great if you stayed home and raised your kids instead of ran off to bang a bunch of women who weren’t your baby mama. Stay home and raise your frickin’ kids!” he said. “Your kids need a father! Get back home!”

On Wednesday, Herschel Walker’s campaign confirmed a report in The Daily Beast that he has a 10-year-old son with a woman from whom he’s estranged.

He fathered the child “years ago when he wasn’t married,” campaign manager Scott Paradise said in a statement to HuffPost.

The Beast reported that the child’s mother, who has not been publicly identified, sued Walker after giving birth to secure a declaration of paternity and child support from Walker, who has limited contact with his youngest son.

After his campaign confirmed the 10-year-old son, Walker, 60, then said Thursday that he also has a 13-year-old son and an adult daughter, who was born when Walker was about 20, after it was reported in The Daily Beast.

“I have four children: Three sons and a daughter. They’re not ‘undisclosed’ — they’re my kids. I support them all and love them all,” Walker said in a statement to HuffPost.

Walker told HuffPost that he “chose not to use them as props to win a political campaign” — though Christian Walker has appeared at events with his father.