Rainforest Politics in Brazil and Congo 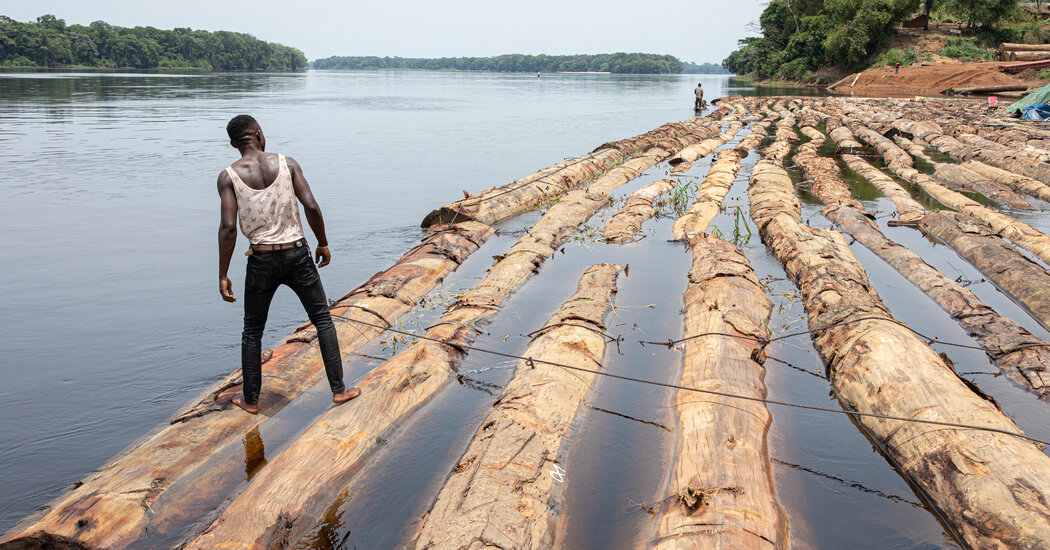 My colleague Dionne Searcey went on a journey along the Congo River that revealed the sprawling, haphazard timber industry, much of it illegal, behind the destruction of a rainforest that is crucial to efforts to curb global warming.

The article described problems that are very similar to the ones I have seen in my reporting in the Amazon rainforest in Brazil: rampant deforestation, a community dependent on an illegal industry and a history of corrupt leadership.

There is one key difference, though.

While Brazil’s president, Jair Bolsonaro, refuses to recognize the problem and has actively weakened environmental protection policies, President Félix Tshisekedi of the Democratic Republic of Congo wants his country to be a climate leader.

Congo and Brazil are home to the two largest parcels of rainforest in the world. Their governmental policies will shape these forests’ ability to remain powerful carbon sinks and shelters to almost half of the world’s species.

I talked to Dionne to understand the similarities and differences between the two countries.

Manuela: Brazil’s and the Democratic Republic of Congo’s forests seem to be facing very similar challenges. But President Jair Bolsonaro’s response has been to turn a blind eye to environmental crime. How does the current leadership in Congo see these problems?

Dionne: The people in power now are very much expressing a will to protect the nation’s resources and are traveling to global climate conferences and hobnobbing with the likes of President Biden and other Western leaders to get attention and resources for protection for their forests. Congolese officials recently hired a D.C. lobbyist to push for support on climate issues, among other economic ones.

When I met with President Tshisekedi last year he said: “We have an amazing potential for renewable energy, be it through our strategic metals or through our rivers,” referring to both mining and hydroelectric power. “Our idea is, how can we put this amazing resource at the disposal of the world, but while making sure that it first benefits Congolese and it benefits Africans?”

Manuela: This reminds me of the movement Brazil went through in the 1980s after the end of the military dictatorship that ruled the country for decades. Democratic governments started establishing very restrictive laws and putting together strong environmental protection agencies. Was there a similar moment when attitudes changed in DRC?

Dionne: President Tshisekedi was thrust into power in a disputed election after decades of corrupt leaders. The U.S. and other Western countries very much wanted his predecessor, ex-President Joseph Kabila, out of power, and so President Tshisekedi has strong American support — and has the ear of U.S. diplomats pushing a climate agenda. But after spending the first years of his term lining up support for his leadership inside the country, he has barely had time to push on climate efforts and now faces re-election as well as political tensions with neighboring Rwanda.

Manuela: Officials in the Democratic Republic of Congo told you almost everyone involved in logging was violating the law one way or another, and it’s happening in plain sight. In Brazil, we see that many Amazon cities have illegal land grabbing, mining or logging at the core of their economies. What are the forces at play that drive this reality in DRC?

Dionne: Many people who live in Congo’s forest are just trying to survive. The forest is most often cut so they can farm or make charcoal for cooking fires, but industrial and so-called artisanal (or smaller-scale) logging are playing a role in forest destruction. In Congo, there are so many forces at play that started generations ago, dating back to colonialism even, that make it complicated to change broken systems. The country has faced wars and has had a succession of corrupt leaders who used the nation’s rich natural resources as their piggy banks. These kinds of structural issues are not easy to unwind. And the breakdown of government in general leads to fiefdoms in far-flung areas of the forest.

Manuela: Many observers think that the reason protection policies didn’t survive under the current administration in Brazil was that they didn’t focus on creating jobs in nondestructive industries. Is the leadership in Congo thinking about this part of the issue?

Dionne: This conversation is the topic of endless academic seminars and government meetings inside Congo and throughout the world. There are a number of organizations trying out projects in small areas but it doesn’t seem like anyone has a silver-bullet solution just yet. The World Bank a few years ago started financing a sustainability program in Mai Ndombe province, paying for acacia seedlings that residents can plant on degraded land and later use for charcoal and construction. And logging companies are technically required to put in place social projects in the communities where they cut trees. But residents say those deals are not always upheld.

Manuela: One of the things that seems most striking to me about the environmental crisis in the Amazon is that a lot of what’s harvested in a destructive way, such as leather and gold, is sold cheaply to wealthier countries, which then make much bigger profits on manufactured products. How do people in the Congo Basin see this imbalance?

Dionne: The people I’ve met in Congo in the course of reporting on natural resources that are important on a global scale — cobalt and trees — are devastated by this imbalance. Some loggers I met earn $6 a day to float their logs to market, a dangerous and potentially fatal job. When I reported a series on cobalt, a metal used for electric vehicle and iPhone batteries, many of the miners who work in horrific conditions didn’t know where the cobalt was headed. When I told them, they were heartbroken.

Join us at Climate Forward London

From June 30 to July 2, you can be with us for three days of science, culture, policy and debate. Understand what action has been taken since COP26 in Glasgow and what urgently needs to come. Register here to participate online, in real time or on demand.

Essential news from The Times

A crucial moment: The Supreme Court is expected to soon rule on a case that could limit the government’s ability to fight climate change. It is the product of a multiyear Republican strategy.

Nuclear troubles: As Europe struggles to cut ties to Russian oil and gas, a crisis forced France, another top energy exporter, to take half of its atomic power plants offline.

Back to coal: Germany will restart coal-fired plants to avoid shortages after Russia, reacting to sanctions, cut off gas supplies to several European countries.

Science endangered: A wildfire in Arizona destroyed four buildings at the Kitt Peak National Observatory. No one was harmed, officials said, and telescopes remained safe.

It’s all connected: Young activists in Eastern Europe are combining antiwar activism with the fight against climate change. Fossil fuels are the common denominator, they say.

From the Opinion section

‘Work Together or Fall Apart:’ The world’s only option to fight against climate change, the food crisis and inflation is to join efforts, the Editorial Board writes.

Before you go: #Peethechange you want to see

Peecyclers are making human urine into fertilizer. It sounds funny, because it is. But it’s also serious. Russia’s invasion of Ukraine unleashed a fertilizer shortage that is threatening food supplies across the world. But it’s not only that. Chemical fertilizers often come from fossil fuels, which contribute to global warming. Turning urine into fertilizer could start to address these challenges — and save water that gets flushed down the toilet, too. The puns are just a bonus.

Thanks for reading. We’ll be back on Friday.

Reach us at climateforward@nytimes.com. We read every message, and reply to many!