Oh, so, close, Zalatoris finishes 2nd in yet another major 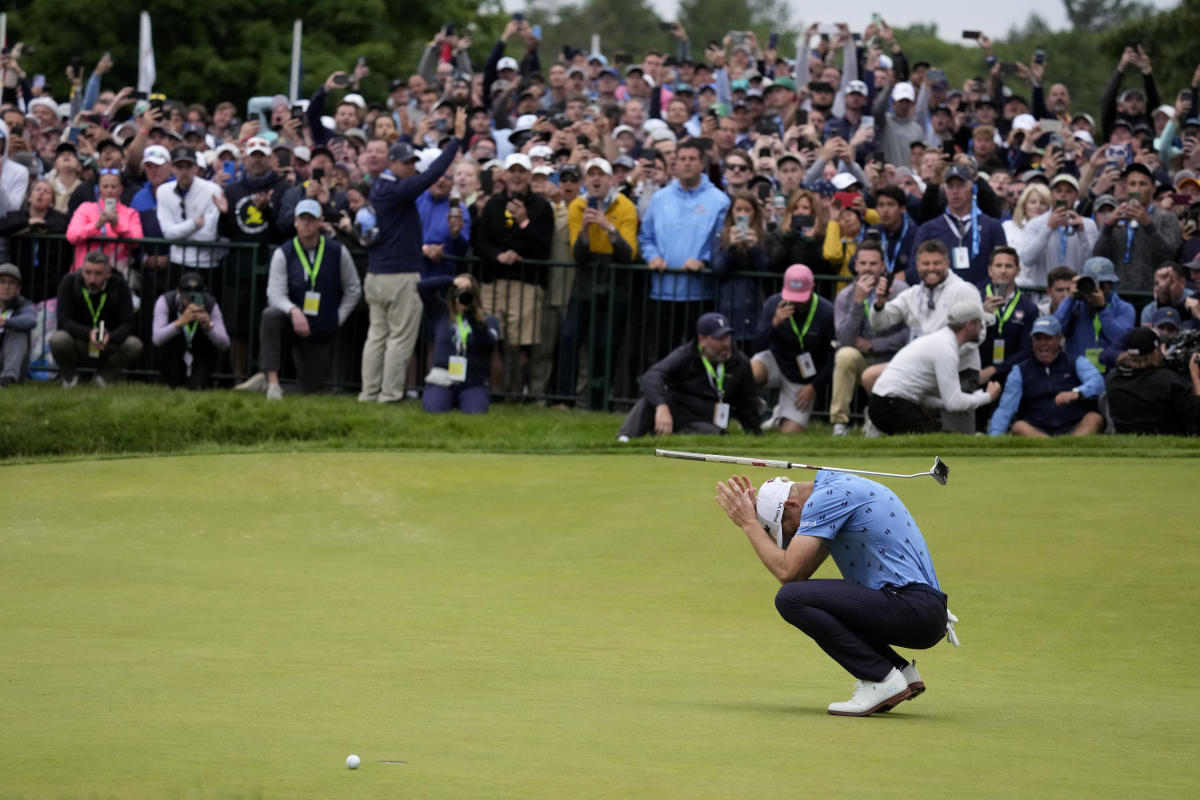 BROOKLINE, Mass. (AP) — The putt slid an inch — make that a millimeter — outside the left edge of the cup. Will Zalatoris squatted into a low crouch and let go of the putter, feeling it slide off the back of his shoulder and onto the turf. He bounced his hands off the green then cupped them over his face.

That’s what agony looks like on a golf course. And even if it never felt more certain that Zalatoris is destined to win a major one day — probably soon — Sunday at the U.S. Open was the most excruciating of his ever-growing list of close calls.

“I thought I had it,” Zalatoris said after his miss left him one shot and less than an inch from a playoff with the champion, Matt Fitzpatrick.

We’ve heard that before.

In all, this marked his sixth top-10 finish in the majors since Zalatoris made his debut in the majors at the U.S. Open at Winged Foot, two years ago. He is 25, has been on the PGA Tour for less than two years and now has runner-up finishes at three of the four majors.

“I’m three shots away from having a chance of being a three-time major champion,” Zalatoris said. “A bounce here or there.”

He and Fitzpatrick were tied as they walked onto the 15th tee box, a 500-yard, par-4 monster with a blind drive over a hill. Fitzpatrick blocked his drive wildly to the right. Zalatoris missed his, too, but not as badly.

When they arrived at the balls, Fitzpatrick’s was sitting on a thin area trampled down by the gallery. Zalatoris’ was gnarled in 4-inch high, lush grass.

Fitzpatrick made a birdie from there; Zalatoris made bogey. He couldn’t overcome that two-shot swing.

“We’re walking down and he goes, ‘I barely miss the fairway and I’ve got a horrible lie and he misses it by 30 yards and he’s OK,’” said Zalatoris’ caddie, Ryan Goble. “But Matt played great. And yeah, it was a great experience. So you just say, ‘Yeah, we’ll get him next time.’”

Zalatoris didn’t have his tour card in 2020 when the pandemic forced the USGA to scrap qualifying and hand out exemptions to top players on the Korn Ferry Tour.

He made the field based on a high ranking that was helped by what still stands as his only professional win. What stood out about that Korn Ferry victory in Colorado is that Zalatoris went into the final round with the lead and wrote Goble a check for the winner’s share before he hit a shot that day.

That’s called confidence, and it’s been growing ever since.

“It’s just the patience and his mentality when he has a bad hole, it’s unbelievable,” Goble said. “I’ve never been around anybody who can just cut it off like that and move onto the next hole.”

Zalatoris came to The County Club on Sunday wearing a shirt dotted with silhouettes of Frances Ouimet and his 10-year-old caddie, Eddie Lowery. It was Ouimet’s stirring victory here in 1913 that helped put golf on the map in America.

After 11 holes Sunday, Zalatoris looked like he’d join the likes of Ouimet, Jack Nicklaus, Tiger Woods and all the rest among the pantheon of U.S. Open champions.

He made putts of 18 feet for birdies on 9 and 11 to open a two-shot lead. He gave a shot back on the par-4 12th. Then, after driving the ball wildly on 13, he answered a long Fitzpatrick birdie with a 12-foot par save of his own to keep the match tied.

All that seemed to put to rest, at least for a day, the lingering questions about Zalatoris’ flat stick. All the major success aside, he came to The Country Club as the 160th-ranked putter on the PGA Tour.

The biggest putt of all barely slid by.

A half-hour after that miss, Zalatoris said he took some solace in that he didn’t miss any short putts, the likes of which have hurt him in his previous close calls, like on the 16th hole at the PGA Championship last month.

And he didn’t three-putt all week.

And he made it through 72 holes of the toughest test in golf without a double-bogey.

“Typically that leads to playing well in a U.S. Open. So the recipe’s there. The game’s there,” Zalatoris said. “But like I said, I’ve just got to wait my turn.”