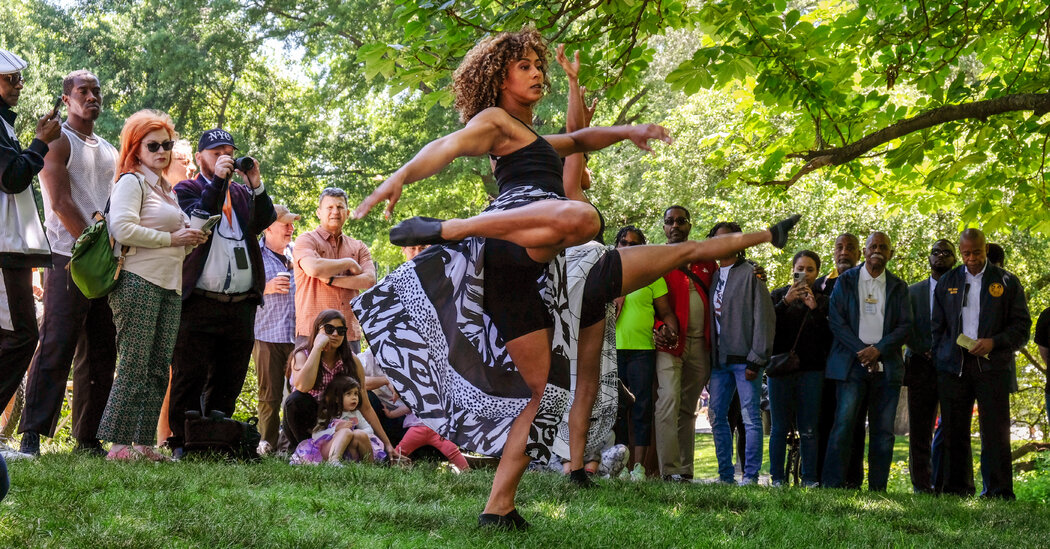 Before the Civil War, a predominantly Black community flourished in Seneca Village, on the land that is now Central Park.

On Sunday, as part of a commemoration of Juneteenth, a federal holiday that recognizes the end of slavery in the United States, Black storytellers, dancers and musicians performed in the park to tell the story of life in that village. It is one of the earliest examples of what life after slavery looked like for some Black people in New York State.

“It’s really important for everyone to know that this land wasn’t just Central Park always. It was actually owned by our own people at one point,” said Andrew Thomas Williams V, 30, a descendant of Andrew Williams, a shoe shiner who at 25 became one of the first Black people to buy land in what would become Seneca Village.

Census records and maps show that around 1,600 people lived on the land that would become Central Park, said Marie Warsh, a historian at the Central Park Conservancy. Around 225 of those people lived in Seneca Village, a thriving African American community.

“It’s definitely the most densely populated and most organized settlement on the land that became Central Park,” Ms. Warsh said.

New York City officials used eminent domain to seize the land in 1857 to build Central Park and offered compensation to the people who lived there. A number of people protested, arguing that what they were offered wasn’t adequate. Among them was Mr. Williams, who asked for $4,000 but was offered $2,335, according to a video produced by the Conservancy.

New York City Mayor Eric Adams, who participated in Sunday’s celebration, noted how that upheaval resonates today, comparing the displacement of Seneca Village to gentrification that is forcing Black residents out of New York neighborhoods now.

“When this village was torn apart to build this park, we displaced the energy of Seneca Village,” Mayor Adams said from the spot where the community’s first church, African Union Church, is believed to have been located.

“It never came back,” he said of Seneca Village. “Starting anew over and over again, and we wonder why we see some of the crises that we’re facing in Black and Brown communities.”

He said the Black families who lived in Seneca Village provided a foundation. “Black communities in the area were forced to move and rebuild in other neighborhoods, such as Harlem, Downtown Brooklyn and Bedford Stuyvesant,” Adams said, adding, “And now what’s happening now? We’re displacing them again.”

The settlement in Seneca Village dates back to the ending of slavery in New York State. In 1817, the New York Legislature passed a law that abolished slavery and set July 4, 1827, as the date the law went into effect — nearly 36 years before President Abraham Lincoln issued the Emancipation Proclamation.

Black people who lived in Lower Manhattan began moving north in the 1820s. Ms. Warsh said they wanted to escape the “racist climate” of Lower Manhattan.

“Even though emancipation had started around 1827, there were still a lot of challenges faced by African Americans living downtown,” she said. “There was a desire to kind of move away from that and create an autonomous community where there was just more opportunity.”

German and Irish immigrants also lived on the land that would become Central Park, but Seneca Village had not only houses but gardens, churches and a school, Ms. Warsh said. Many people were landowners and had the right to vote.

Isheeka Edwards, 37, watched the commemoration on Sunday with her two children, Lesedi, 8, and Kopano, 3, as Gha’il Rhodes Benjamin, a spoken word poet, led the crowd singing “This Little Light of Mine” on the west side of the park near 85th Street, the former location of Colored School #3 in Seneca Village.

Ms. Edwards, who said she lived in a community that was 1.6 percent Black out west, said she specifically visited the city to celebrate Juneteenth. “Anything that’s specifically African American or just seeing Black people regularly is pretty limited there,” she said.

She wanted her children to “be aware of that side of America, that history, their own culture,” she said.

Natasha Mast, 42, who attended the event with her husband and two sons, who are 7 and 11, said she was grappling with what should happen next. “Should it be given back in some way?” she asked. “It’s definitely something that I’m thinking about, and I don’t quite know what the right action is at this point in history.”

In the meantime, she planned to continue educating herself and her children about Seneca Village and Juneteenth.

“I’m from Canada, but I wasn’t aware of Juneteenth until recently, and I don’t want my kids to grow up not being aware of this important date and what it means, so I’m here for my own education but also for them as well,” Ms. Mast said.

Priscilla Bruderer, a nurse who lives on the Upper West Side, also wanted to make sure her child knew about Seneca Village and Juneteenth.

“I feel happy because African Americans actually got a place to live,” said her son, Mathias Bruderer, 10, who listened to music and made bracelets as he learned about the history of Seneca Village.

Laika Calhoun, 17, a rising senior at Nanuet Senior High School in Nanuet, N.Y., attended with her brother and parents. She said she was experiencing a range of emotions, including both gratitude and sadness.

“Not only am I in this location, I am witnessing other Black excellence,” Ms. Calhoun said. “The dancers are real, the people are real — it’s not just remembering what happened, it’s seeing a new, updated version of it.”