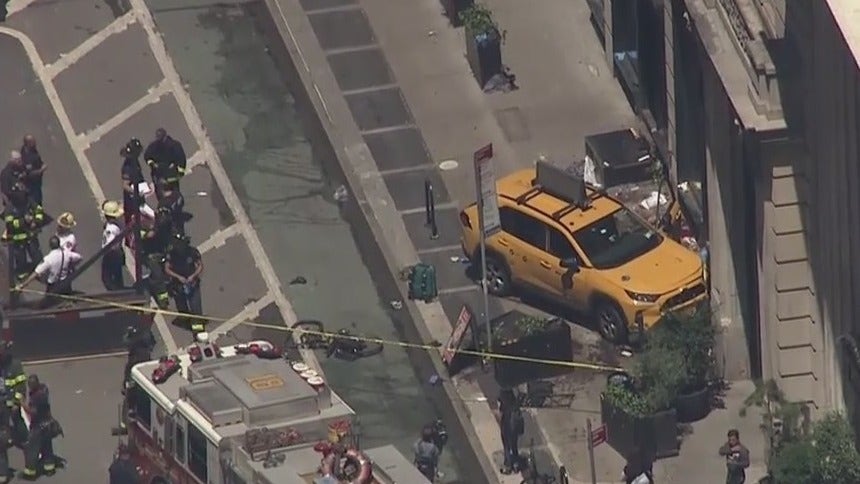 A New York City taxi cab jumped a curb in Manhattan Monday afternoon and slammed into a crowd of people dining outside, according to city police.

An NYPD spokesperson confirmed at least four people had been struck, three of whom suffered critical injuries.

The driver’s condition was not immediately clear.

An aerial view shows the aftermath of a New York City taxi crash that left at least 4 pedestrians hurt, three of them critically, according to authorities.
(FOX 5 NY)

It happened at 1186 Broadway, a few blocks away from Madison Square Park and an area frequently packed with New Yorkers and tourists alike.

Police said Broadway was closed near 29th Street as part of the investigation.

MEXICO: 2 ACTORS IN NETFLIX SHOW ‘THE CHOSEN ONE’ ARE DEAD FOLLOWING CRASH

The driver may have suffered a medical emergency, he said, but investigators were still looking into the circumstances that led up to the crash.

Cellphone video shared to the Citizen App showed a crowd of onlookers watching as firefighters taped off the area and approached the cab, a mid-sized SUV that had come to a stop with all four wheels on the sidewalk.

An aerial view of the aftermath provided by FOX 5 New York appeared to show blood on the sidewalk. The victims were rushed to Bellevue Hospital, according to the station.

This is a breaking news story.

Michael Ruiz is a reporter for Fox News Digital. Story tips can be sent to michael.ruiz@fox.com and on Twitter: @mikerreports