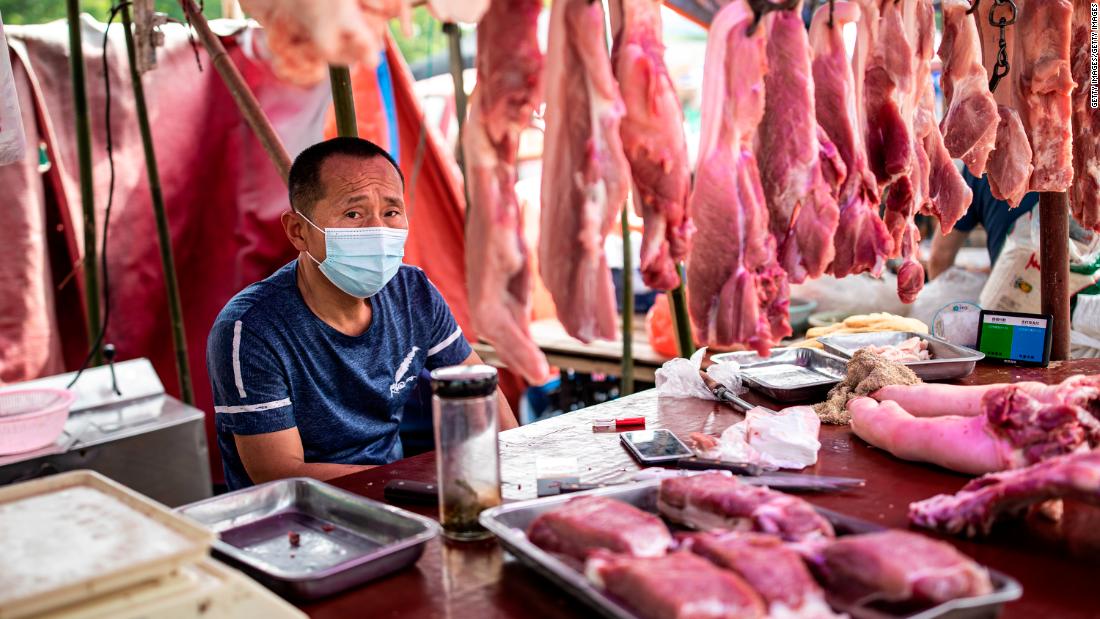 In one, scientists from around the world used mapping tools and social media reports to do a spatial and environmental analysis. They suggest that although the “exact circumstances remain obscure,” the virus was probably present in live animals sold at the market in late 2019. The animals were held close together and could easily have exchanged germs. However, the study does not determine which animals may have been sick.

The researchers determined that the earliest Covid-19 cases were centered at the market among vendors who sold these live animals or people who shopped there. They believe that there were two separate viruses circulating in the animals that spilled over into people.

“All eight COVID-19 cases detected prior to 20 December were from the western side of the market, where mammal species were also sold,” the study says. The proximity to five stalls that sold live or recently butchered animals was predictive of human cases.

“The clustering is very, very specific,” study co-author Kristian Andersen, a professor in the Department of Immunology and Microbiology at Scripps Research, said Tuesday.

The “extraordinary” pattern that emerged from mapping these cases was very clear, said another co-author, Michael Worobey, department head of Ecology and Evolutionary Biology at the University of Arizona.

The researchers mapped the earliest cases that had no connection to the market, Worobey noted, and those people lived or worked in close proximity to the market.

“This is an indication that the virus started spreading in people who worked at the market but then started that spread … into the surrounding local community as vendors went into local shops, infected people who worked in those shops,” Worobey said.

The other study takes a molecular approach and seems to determine when the first coronavirus infections crossed from animals to humans.

The earliest version of the coronavirus, this research shows, probably came in different forms that the scientists call A and B. The lineages were the result of at least two cross-species transmission events into humans.

The researchers suggest that the first animal-to-human transmission probably happened around November 18, 2019, and it came from lineage B. They found the lineage B type only in people who had a direct connection to the Huanan market.

The authors believe that lineage A was introduced into humans from an animal within weeks or even days of the infection from lineage B. Lineage A was found in samples from humans who lived or stayed close to the market.

“These findings indicate that it is unlikely that SARS-CoV-2 circulated widely in humans prior to November 2019 and define the narrow window between when SARS-CoV-2 first jumped into humans and when the first cases of COVID-19 were reported,” the study says. “As with other coronaviruses, SARS-CoV-2 emergence likely resulted from multiple zoonotic events.”

The likelihood that such a virus would emerge from two different events is low, acknowledged co-author Joel Wertheim, an associate adjunct professor of medicine at the University of California, San Diego.

“Now, I realize it sounds like I just said that a once-in-a-generation event happened twice in short succession, and pandemics are indeed rare, but once all the conditions are in place — that is a zoonotic virus capable of both human infection and human transmission that is in close proximity to humans — the barriers to spillover have been lowered such that multiple introductions, we believe, should actually be expected,” Wertheim said.

Andersen said the studies don’t definitively disprove the lab leak theory but are extremely persuasive, so much so that he changed his mind about the virus’ origins.

“I was quite convinced of the lab leak myself, until we dove into this very carefully and looked at it much closer,” Andersen said. “Based on data and analysis I’ve done over the last decade on many other viruses, I’ve convinced myself that actually the data points to this particular market.”

Worobey said he too thought the lab leak was possible, but the epidemiological preponderance of cases linked to the market is “not a mirage.”

“It’s a real thing,” he said. “It’s just not plausible that this virus was introduced any other way than through the wildlife trade.”

To reduce the chances of future pandemics, the researchers hope they can determine exactly what animal may have first become infected and how.

“The raw ingredients for a zoonotic virus with pandemic potential are still lurking in the wild,” Wertheim said. He believes the world needs to do a much better job doing surveillance and monitoring animals and other potential threats to human health.

Andersen said that although we can’t prevent outbreaks, collaboration between the world’s scientists could be key to the difference between a disease with a small impact and one that kills millions.

“The big question we need to ask ourselves is — the next time this happens, because it will happen — how do we go from detecting that outbreak early and preventing that outbreak so it doesn’t become a pandemic?”