NASA discovers mysterious balanced rock on Mars, igniting debate over how it happened 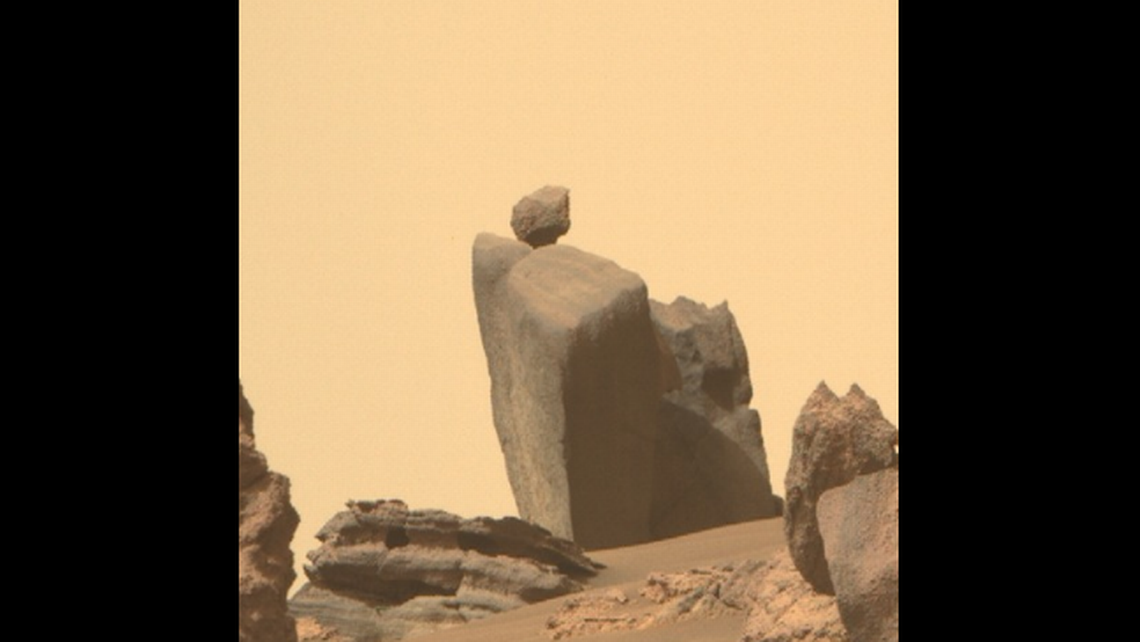 NASA’s roving camera on Mars has discovered another oddity in the 750-mile-wide Jezero Crater, and it has some people wondering if aliens are yanking our chain.

A rock about the size of bowling ball was photographed precariously balanced atop a leaning boulder.

The find was announced just one day after NASA questioned whether “the wind” blew a piece of rocket insulation 1.2 miles away from the Perseverance Rover’s entry point on Mars.

A photo of the formation was shared June 16 on Facebook, and NASA says it’s in an area named “Hogwallow Flats.” Rocks in the area are believed to be “as old as 3.6 billion years.”

“The nearby rocks are a sight to behold,” NASA reported. “Take a look at some of these close-ups. Tons of potential targets for study.”

NASA didn’t address the balanced rock specifically, likely knowing social media would point it out and raise questions. The post has since gotten 14,000 reactions and nearly 300 comments as of the morning of June 19, including some who called it “a Martian basketball.”

“The shape of this rock is not natural,” Ahmad Ahmad Alawaj posted.

“Did you see an alien sitting on the rock?” Ravindu Nimsara asked.

Some speculated the rock was connected to the boulder under it, and was simply an example of weaker stone weathering away around it over the centuries. A few swore they even saw a pedestal.

The space and astronomy news site Universe Today marveled that it had somehow become “perfectly balanced.”

“Knowing the history of that rock would certainly provide an interesting story, geologically speaking,” the site wrote.

“What process or processes could bring a rock to be in such an unlikely position? … It’s very unlikely the rock was ‘dropped’ into its current location. More probable is that the rock was part of the original bedrock formation and over millennia, wind erosion wore it down to its present shape.”

NASA has cited weathering as a likely cause for several other odd formations seen on Mars, including a series of “spikes” photographed last month at Gale Crater.

Rocks near the “Martian basketball” formation appeared honey-combed with holes, and Universe Magazine Space Tech noted one resembled a snake head jutting out of a rock wall.

Slithering formations found at the bottom of impact crater on Mars. What are they?