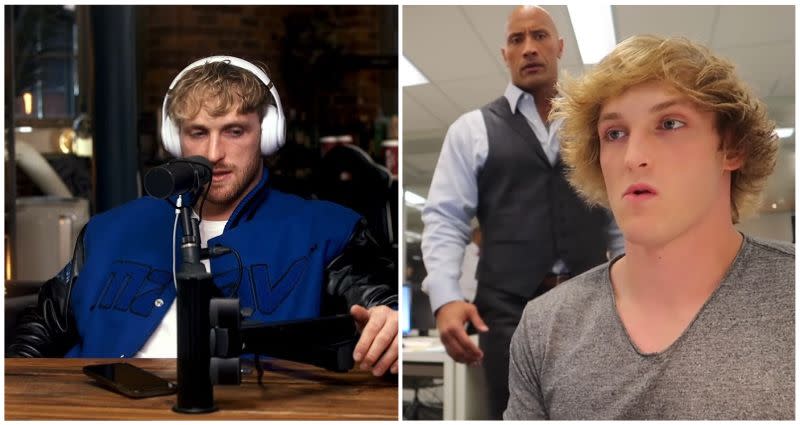 YouTuber Logan Paul recently opened up about how Dwayne “The Rock” Johnson cut ties with him after his scandalous Aokigahara incident in 2017.

During his appearance on the “True Geordie Podcast,” Paul, 27, revealed that his publicist, who also represented Johnson, 50, called him in the aftermath of the Aokigahara incident and said that the former WWE wrestler wanted Paul to remove all of his videos and pictures of them from his social media.

“This was one of the saddest moments of my life, what I’m about to say,” Paul said. “After Japan happened, I obviously found myself in a hole – rightfully so – that I had never been in before. Extremely low, mentally, and I got a call from my publicist, who also repped Dwayne ‘The Rock’ Johnson.”

“She’s like, ‘Hey, Dwayne has asked that you remove every video and picture that you’ve done with him. Maybe in the future the relationship can be reconciled, but for now, he basically wants nothing to do with you,’” Paul continued. “Which I also understood. I get it. I made a grotesque error.”

Before being embroiled in the controversy, the two had appeared in several viral videos together, including one where Paul visits Johnson on the set of the 2017 movie “Baywatch.”

Their relationship purportedly turned sideways in 2018 after Paul went to Japan’s Aokigahara forest, also known as the “suicide forest,” on the slopes of Mt. Fuji in December 2017.

While filming a vlog, Paul and his crew saw the body of a suicide victim. Instead of immediately calling the authorities, the vlogger and his team focused their camera on the corpse and posted the video on YouTube.

The video, titled “We found a dead body in the Japanese Suicide Forest…,” was eventually taken down, and Paul issued an apology video amid the backlash. Over four years after the incident, Paul admitted to Ariel Helwani of “The MMA Hour” that his apology video was “half-ass.”

Regarding his relationship with Johnson after the controversy, Paul shared, “I feel like we had a healthy relationship, an open line of communication. I was so sad that my hero wanted nothing to do with me.”

“I was sad because I understood it. I really f*cked up,” he added.

In a 2018 interview with Express, Johnson opened up about his battle with depression and how, at the age of 15, he saved his mother from attempting suicide months after they were evicted from their apartment.

“She got out of the car on Interstate 65 in Nashville and walked into oncoming traffic. I grabbed her and pulled her back on the gravel shoulder of the road,” Johnson said. “What’s crazy about that suicide attempt is that to this day, she has no recollection of it whatsoever. Probably best she doesn’t.”

When asked if Paul ever reached out to Johnson after the incident, the YouTuber admitted that the Hollywood actor sent him an Instagram direct message “about three months ago” as if “nothing ever happened.”

YouTuber True Geordie, whose real name is Brian Davis, then asked Paul if he replied to the message, but the latter only shook his head in response.

If you or anyone you know is struggling with thoughts of suicide, please contact the National Suicide Prevention Lifeline at 1-800-273-8255. For a list of international suicide hotlines, click here.