I stayed at Pablo Escobar's former mansion in Tulum, and everything from the food to the underground pool blew me away 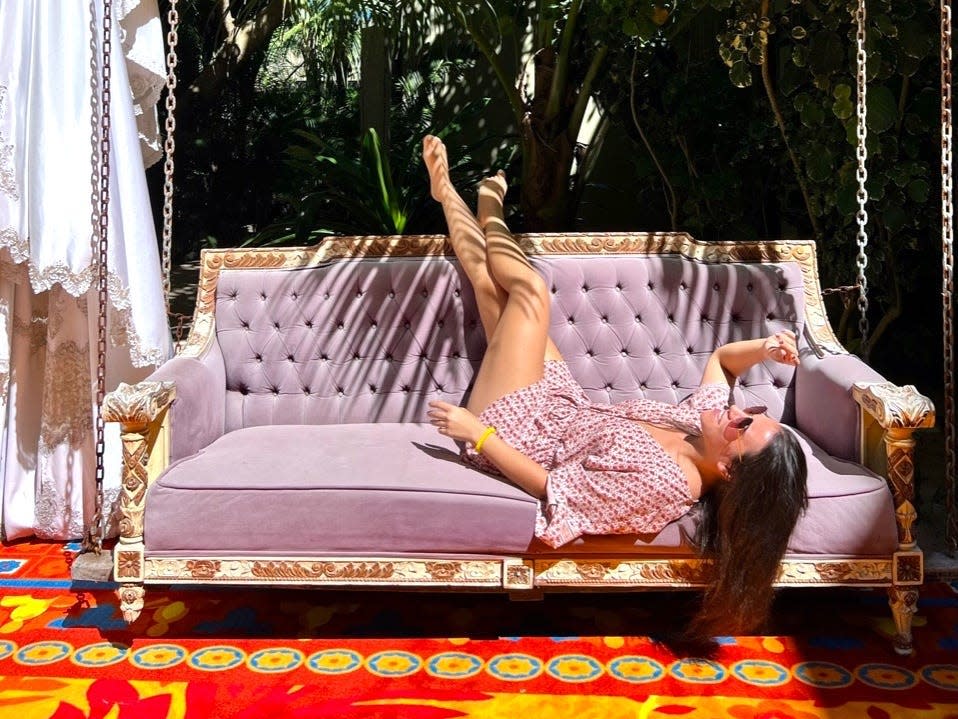 The minute I found out I was going to Tulum, I knew I had to spend a night at Casa Malca.

Originally a laid-back hippie town, Tulum has fast become a go-to destination for more than just bohemians. Celebrities have flocked to the resort-lined jungle on the Caribbean coast, while the wild beach clubs and restaurants are now a huge draw for partygoers.

I was heading to Tulum for a bachelorette party and booked a few extra days so I could explore. And at the top of my bucket list was Casa Malca.

Casa Malca was once a mansion owned by the Colombian drug kingpin Pablo Escobar.

The mansion was abandoned following Escobar’s death in 1993 and wasn’t discovered until 2003. It later caught the attention of renowned Colombian contemporary art collector Lio Malca, who bought the estate in 2012.

“I purchased the property because I thought it was insane,” Malca told Cool Hunting in 2016. “I could not believe that in this world, a property like this still exists and hasn’t been taken over by a corporation.”

Lio Malca transformed the mansion into a five-star resort filled with his own art collection.

Casa Malca opened in 2014 with eight rooms in the original mansion, and has since expanded to 71 suites offering views of the private beach or lush gardens. There are also three restaurants, two bars, and a spa.

But it’s Malca’s personal touch that really makes the resort stand out. Each room has been curated by the gallerist himself, with priceless works of art in every nook and corner. Search for Casa Malca on Instagram and you’ll see a Keith Haring, Basquiat, or Jeff Koons pop up on an influencer’s grid.

There’s also an air of exclusivity. While tourists can access Casa Malca by paying a $110 food and drink minimum at any of its restaurants, most of the resort — including its popular Instagram spots — is reserved only for guests.

A sparkling chandelier dangling from a tree greeted me at the entrance of Casa Malca.

There was already this cool, exclusive atmosphere I’d never experienced at a resort before. The vibe was fitting for a place that used to be Escobar’s secret mansion.

The lobby was flanked by regal purple drapes and a floating sofa that looked straight from the Victorian era.

Scarlet couches popped against the golden walls, which featured a psychedelic acrylic piece by Holton Rower.

I walked in with my friend Ria — who was staying at the resort with me after her bachelorette party — and we looked around the room in wonder as a kind receptionist greeted us with bright-red drinks. The watermelon and passion-fruit juice was so delicious that Ria tried to re-create it for her wedding cocktail.

Before we were taken to our suite, Ria and I got a tour of the resort.

We were first shown the pool, which was illuminated by an archway lit up with fairy lights.

As we walked by the pristine beach, our guide told us we could sleep under the stars if we desired since Casa Malca’s beach is also completely private.

The art looked beautifully dramatic against the night sky.

I was struck by this red Kenny Scharf sculpture guarding the pool. Its cherry hue popped against the natural blues and greens of the water and fauna, a juxtaposition of art and nature that Malca wanted to achieve throughout his resort.

“Casa Malca is a hotel that is much more than a hotel,” his official website reads. “It is a luxury retreat where design and art envelop the guests within a magical reality.”

After the tour, we walked into our unique suite.

I’ve been lucky to stay at a number of resorts in various countries, but I’ve never seen a hotel room like my suite at Casa Malca. Eschewing the traditional resort decorations of bright colors, flowers, and tropical prints, our suite looked more like a fortress.

The room was decorated with olive-green walls and a pop of royal purple from the velvet curtains and Persian rug.

I checked out the plush king bed, which instantly enveloped me. I wrote in my notes that sleeping there felt like “being hugged by a sweet angel, you just sink into it.” Clearly, I become a poet when I’m on vacation.

The room was definitely bigger than my studio apartment back in LA.

The junior suites measure 650 square feet and feature views of either a private garden (like mine) or the ocean. My room — which can sleep up to three — cost $712 and included breakfast. Upon arrival, the receptionist revealed that we’d also been given complimentary hydrotherapy sessions (more on that later).

I should note that the room rates can vary widely depending on the season. Prices can start as low as $390 for the garden suites, but generally are in the $575 range and spike to $700 in October and November. The beachfront suites are about $200 more on average, while rooms in the actual mansion will cost you at least $1,000.

Our bathroom embraced the suite’s fortress vibe with this silver and black color palette. Two plush robes waited by the sink, which was stocked with the usual amenities.

But I won’t lie, the toilet kind of reminded me of a dungeon.

I started laughing when I went looking for the toilet and opened this door. I’ve never used such a dark toilet, unless you count the porta-potties at music festivals (shudder).

Thankfully, this was a far better experience, and the elegant lamp added to the artsy touch. But I was just a little scared when I used this bathroom in the middle of the night.

The shower looked similar, but it was one of the best I’ve ever experienced.

Maybe it’s because I had just stayed at an Airbnb where the shower was lukewarm at best (which seems to be the norm with Airbnbs in Tulum), but I thought my shower at Casa Malca was absolutely glorious. I always love when resorts have a rain shower, something about them just feels so luxe.

The water got steaming hot, and the pressure was perfect. The dark interior also felt far more fitting for the shower — giving it a spa-like atmosphere.

I never thought I’d spend so much time praising a shower in a hotel review, but it’s well-deserved. I hadn’t even been to my hydrotherapy session yet and I was already feeling reborn.

Then it was time for a late dinner at Philosophy, one of Casa Malca’s three restaurants.

Philosophy melds traditional Mexican dishes with contemporary European cuisine. The space was just as its website had described — “unique, romantic, and sarcastic” at the same time.

The dimly-lit space is decorated with glittering chandeliers and Persian rugs, a combo that Malca clearly loves. Regal portraits hung on the walls, while vintage Bollywood posters greeted me in the bathroom stalls.

Every dish we ate looked beautiful, but this octopus was especially stunning.

Our favorite dish of the night was the $26 USD Carpaccio de Pulpo, which looked like a flower in bloom. Served with a capers aioli, guajillo chili, and sprouts, Ria and I were both wowed when it came to the table. I’d never seen octopus served in such a way! The octopus was light and juicy, and definitely one of the more memorable dishes I’ve had in Tulum.

Our night at Casa Malca had been a memorable one. And the morning was off to a gorgeous start.

The best part about Casa Malca’s suites is the floor-to-ceiling windows at the front, which gave us a full view of the lush and vibrant garden. It was the perfect way to start our day.

We ate breakfast right by the stunning private beach.

Colorful plates of fresh fruit and pastries arrived at our table right as we sat down.

Our waiter asked if we’d like some complimentary mimosas with our breakfast, to which we gave a resounding yes. Now that’s my kind of paradise.

Our favorite dish was this quesadilla trilogy.

The “Trilogia de Quesadillas” featured three quesadillas — one with mushrooms, one with Oaxacan cheese, and another with huitlacoche. They were served with a delicious pico de gallo and guacamolada sauce and absolutely hit the spot.

After breakfast, we checked out the pool in the daytime.

I realized you could see the ocean through the archway, which was a stunning sight.

And as we walked around, I was surprised by how quiet everything felt. There were other guests of course, but with so much space for only 71 suites it mostly felt like our own private resort.

The underground pool was even cooler.

This pool — hidden right underneath the main one at Casa Malca — is lit up with moody blue and purple lights.

Its secluded, secret vibe fits perfectly with the property’s legacy.

We enjoyed massages on the private beach, which was nearly empty.

I’ve been to many hotels where I’ve had to get up early for a prime spot on the beach, but there’s no such stress at Casa Malca.

The beach had plenty of daybeds and cabanas available for guests, and it was easy to get a last-minute reservation for Swedish massages.

My masseuse handed me a piece of paper so I could circle the areas I wanted her to focus on. Then I just laid down and listened to the crashing waves as my sore muscles melted away.

Then it was time for our first ever hydrotherapy session.

We arrived at Casa Malca’s Calm Spa, where the hydrotherapy session was broken down for us. First, we’d spend 15 minutes in the sauna, take a cold shower, then have a 10-minute steam shower. We’d wrap things up with a Jacuzzi session and a quick dip in the cold plunge pool.

After so many days of partying — plus a rough bout of nausea and car sickness — the hydrotherapy session was exactly what we needed. The steam room was definitely intense (I described it in my notes as “hot yoga x1000”), but we felt amazing afterward.

“I feel like I’m ready to conquer the world,” Ria told me as we sipped on our hot tea after the session.

Newly refreshed, we decided to get a closer look at all the art.

Malca regularly rotates many of his pieces to keep things interesting for his returning guests. In the photo above, I’m posing with sculptures by the artist Yue Minjun.

Each work of art is carefully selected with Tulum’s climate in mind.

“It’s very important to make sure the pieces are OK with the humidity and heat,” Malca told Cool Hunting. “We put out pieces that will not suffer.”

I couldn’t leave before taking a picture with the iconic chairs at Casa Malca’s entrance.

These hanging chairs are framed by curtains that were crafted from vintage Mexican wedding dresses.

My time at Casa Malca had come to an end. And it was, without a doubt, the coolest resort I’ve ever experienced.

One thing I love about Tulum is it’s never predictable. You can spend all day swimming in one of the gorgeous cenotes, then party like you’re in Vegas. You can stay in a luxury tent in the middle of the Yucatan jungle, or in Escobar’s former mansion. Every day on my trip was full of surprises, just like every corner of Casa Malca.

Casa Malca is somehow whimsical, relaxing, mysterious, and sexy all at once. I could see it being the perfect getaway for a couple or a big group of friends.

I loved Casa Malca so much that I’m already planning my next trip back. Because in Tulum, this is where the magic is at.

Read the original article on Insider