I ate at Gucci's Beverly Hills restaurant frequented by stars like Dakota Johnson, where drinks cost up to $40 and all diners must follow a set of rules 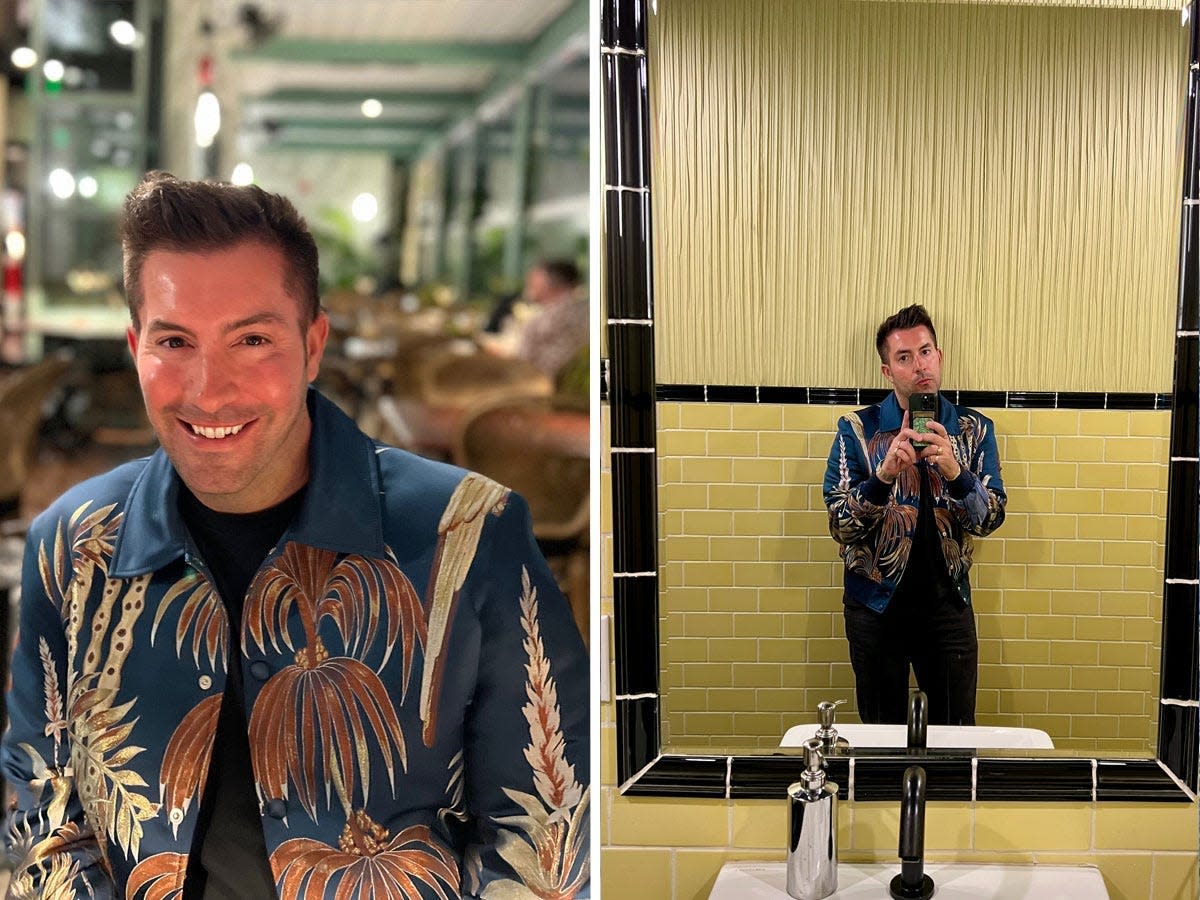 Gucci is a luxury fashion house known for stylish designer clothing and accessories. The brand also now operates four restaurants around the globe, including Gucci Osteria in Beverly Hills, which I visited to see if it was worth the hype.

On a recent trip to Los Angeles, I was intrigued when a local pal told me that Gucci Osteria da Massimo Bottura, a ritzy restaurant from the fashion house of the same name, was at the top of his list for local dining experiences.

While I’m a fan of the luxury Italian brand and have purchased its clothing and accessories in the past, I’ll admit that I was a little skeptical of what that brand would be like as a high-end restaurant.

Gucci Osteria in Beverly Hills opened at the beginning of the pandemic and follows other outposts in Tokyo, Seoul, and Florence, the latter of which I admired from afar on a trip to Italy a few years ago while visiting the adjacent Gucci Museum. I decided to heed my friend’s advice and give the restaurant a try.

Gucci Osteria is currently a hot reservation in Los Angeles, and the process of securing one required a few steps.

The restaurant allows you to secure tables on Resy, however, they were booked out by 30 days when I tried to make mine.

Determined, I called the restaurant directly to secure a reservation for a party of six on a holiday Sunday. I’ve had better luck with this approach lately, especially when accessing restaurants in my hometown of New York that are hard to get into.

Within 48 hours, a reservationist called me back to provide a booking link through “RSVP” to complete my reservation. I then had to provide some information on myself and my party, and most notably, credit card information to reserve the table. This was a requirement to confirm, and if you don’t show up to the restaurant, they charge an $80 no-show fee per person, which meant my party was on the line for $480.

As of press time, reservations are still booked 30 days out for Gucci Osteria, so I would similarly encourage you to plan in advance, or call if you can.

Gucci Osteria Beverly Hills’ popularity and competitive reservations might have to do with its celebrity clientele.

All diners who eat at the Gucci Restaurant must follow a set of rules, including a “smart casual” dress code.

My confirmation email reminded me that reservations were for full-service dining only, meaning the restaurant is not keen on you showing up just to have a drink and an app.

And while an à la carte menu is available for lunch, dinner service is a tasting menu only. And parties of six or more are always required to partake in the tasting menu despite their dining time.

Flash photography is not allowed, and “keeping photos to a minimum” was advised, although I did openly take many photos while I visited the restaurant.

The restaurant also has a dress code: smart casual. I thought that everyone in the restaurant appeared to dress to impress, donning at least one Gucci piece or, in the case of some, head-to-toe Gucci.

I personally wore black Gucci loafers and a black Gucci t-shirt, but the star of my outfit was a Lanvin floral printed jacket. That said, designer threads are not required in the space, but if you’re worried about what to wear, I would opt for trendier options and men specifically should pair their look with a smart pair of shoes or belt.

The restaurant is tucked above the Gucci store in Beverly Hills.

On the day of our reservation, my party and I headed to downtown Beverly Hills to the famed Rodeo Drive where the restaurant is located, just above Gucci’s boutique.

A door with an iron gate that seemed to almost blend in with the store’s green marble facade greets visitors with discreet signage.

Since the restaurant is on the 2nd floor, I first entered what is mostly a reception area with a host stand but a bold one, with vibrant blue floral and bird print wallpaper that lined the entrance all the way to the pistachio green-colored elevator.

Inside the restaurant, I thought the decor felt bold and elegant, but also surprisingly casual.

Once upstairs and past a second host stand, I thought that the restaurant exuded an upscale Italian vibe that was casually elegant but not stuffy.

Smaller and more intimate than I imagined it would be, the restaurant features more bold print wallpaper, marble walls and tables, beautiful floral arrangements, red tufted banquettes and pink cushions, and herringbone wood floors. An occasional Gucci-print armchair provided a pop of branding.

I thought the glass-enclosed terrace was the focal point of the restaurant, though, and was where I dined with my guests. Overhead tiny electric fans reminded me of more casual places I might eat on vacation in Italy, while the marble mosaic floors felt refined.

I thought the table settings were equally stylish, with a mix of patterns and textures that felt both chic and somewhat irreverent. A leather menu adorned with an evil eye and star motif were recognizable symbols that have been prevalent in Gucci’s imagery for years, and the plates featured red-hued floral and leaf prints. The table was intimately lit by a trendy cordless lamp.

I started my meal with a delicious — albeit expensive — cocktail featuring Gucci imprinted ice cubes.

While I knew this would be a pricey place to dine, I was somewhat taken aback that cocktails ranged from $25 to $40.

I had the $25 Calirosa Garden, which was made with Calirosa tequila, dragoncello, prickly pear, lime, and shiso. While I thought it took a while to reach our table, it was worth the wait.

As a tequila drinker, I liked the drink, but the cocktail winner at out table that everyone wanted a taste of was the “Coffy with Milk,” made with Nakkia ‘Coffy’ gin, Nigori sake, Pio Cesare vermouth, and Luxardo Bianco. It came with a large, custom Gucci-branded ice cube in it.

We also ordered Italian wine picked by a knowledgeable sommelier.

For the red wine we would pair with our meal, we selected Francesco Rinaldi Barolo Cannubi 2015.

The sommelier, Jon, told me that Rinaldi is one of the most sought-after and respected wineries in Barolo, and Cannubi is one of its greatest crus. I thought that the classic Cannubi tasted of crushed flowers, mint, and bright dusty red fruits with firm elegant tannins.

The restaurant offers a five, seven, or eight-course tasting menu for dinner. We chose the five-course menu, which started with a burrata dish inspired by a famous Los Angeles monument.

Gucci Osteria’s approach to cuisine, in their words, “rides the wave of the seasons with creativity, elegance, humor, and sensuality” and draws inspiration from each locale where they operate.

In the case of the Beverly Hills restaurant, our first course of burrata was plated to resemble the Frank Gehry-designed Walt Disney Concert Hall, an iconic building in downtown Los Angeles. The dish featured white asparagus, buckwheat, and seaweed and I thought it looked like art on a plate with an appetizing combination of flavors.

My dining companions and I then enjoyed a seafood salad dressed with olive oil, seasonal greens, and a pinch of fleur de sel.

Our second dish consisted of a thinly-sliced seafood salad with seasonal greens. This was my least favorite dish as I found the combination to not be as flavorful as I’d hoped, but other diners at my table disagreed, so, it might have been more a personal taste.

My favorite dish was a risotto that tasted similar to a pizza. Our server said it was also the most popular with other diners.

The third and most standout dish, in my opinion, was called “Risotto Camouflaged as Pizza.” It was a crowd-pleasing combination of tomato, basil, and Stracciatella that I thought melted in my mouth the way a delicious slice of Neapolitan-style pizza might.

Next was a uniquely presented version of a classic Italian fish dish.

The fourth dish was a thickly-breaded fried fish, “Cod as Milanese,” that came with a rectangular slice of a farmer’s market tomato terrine.

In my opinion, any fried fish is yummy, but I thought this version was sophisticated in technique and perfectly cooked.

Last was dessert. I thought the standout offering were the petit fours and pasticcini served on an elegant leaf-print cake stand.

Overall, the portions were a good size, and I surprisingly was ready and excited for dessert.

Affectionately called the “Charley Marley,” we were presented with a wild rice dessert combined with chocolate and hazelnut. Texturally, I thought it was lovely but as I’m personally more of a chocolate or hazelnut mouse fan, it was admittedly not my favorite.

However, after finishing the meal with a Lavazza espresso, the waitress brought over a cake stand full of pastries that more than made up for it.

Including a round of cocktails and bottles of wine, the bill for our meal at the Gucci Restaurant in Beverly Hills was roughly $2,200 for a party of six.

Eating at Gucci Osteria Beverly Hills was not cheap. Then again, I certainly did not expect a Gucci-branded restaurant in Beverly Hills to be.

Our bill for six people, which we paid in full, was roughly $2,200 total with tip. Since we only did the five-course tasting menu, and there are more expensive, elaborate options, if you do plan to visit the restaurant, I would assume spending at least $350 or more per person with cocktails and/or wine.

I would dine at Gucci Osteria Beverly Hills again, but there are a few things I would do differently next time.

While I, along with the guests in my party, liked many of the dishes at the restaurant, I’ll admit that not everything was perfect for me.

While I thought the caliber of service was high, I found the service to be a little slow and the cost, portion sizes, and overall flavors were not all that different from other upscale restaurants where I’ve dined and, in my opinion, had more interesting experiences. However, that’s not to say that this wasn’t an extremely solid, sophisticated meal. It was.

The ambiance and beautiful light-filled terrace alone are enough of a draw to bring me back to Gucci Osteria Beverly Hills, and that’s before even mentioning the crowd.

To me, the restaurant is really more about the total experience and is right for diners who see-and-be-seen type of places.

Next time, I would skip the dinner tasting menu and go for lunch instead when the à la carte menu is offered and share a few dishes with a smaller group.

I would also ideally coordinate my next visit around the holiday season, especially after seeing Chef Agazzi unbox this incredible homemade panettone, the Italian sweet bread that originated in Milan, on his Instagram feed.

Read the original article on Insider