Honoring my scallions: How my Asian parents’ food waste made me an environmentalist 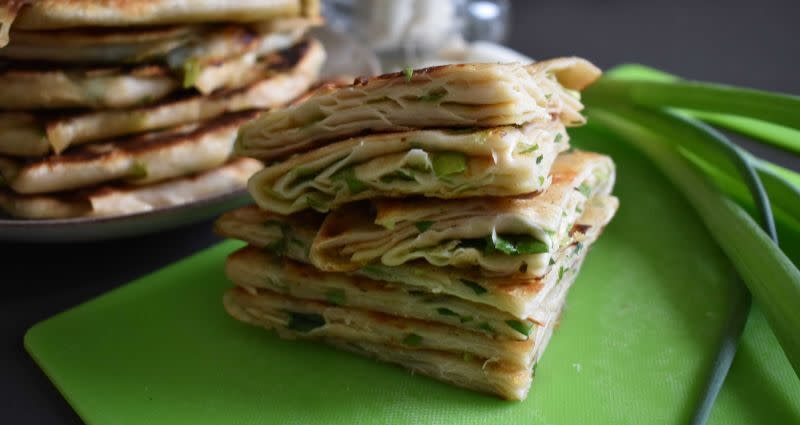 Growing up as a low-income, first-generation Asian American, I was motivated by my immigrant parents’ food insecurity to fight for our planet.

I was born into an American culture of honoring consumption. I was never shy, taking extra servings of catering food home from school events. Not because I was stingy, but because my immigrant parents whispered their fears of starvation after moving to the United States to escape poverty and the Vietnam War. My Chinese Vietnamese family of six struggled to stretch our monthly food stamps, like most families in Lincoln Heights, Los Angeles.

The first and last composting committee

During my time studying at Title One schools, my eyes lingered on the food waste around me. Instead of offering resources for food insecurities, the school administrators poured money into the same milk cartons students like myself could not save and bring home. I was overwhelmed and angry — so much food was thrown away, while families like mine struggled to put food on the table.

As a member of the Associated Students Board at one of my previous schools, I proposed a composting committee, which would place bins with composting instructions around campus. Students were given the option to throw their food waste into the collectors, which committee members transported to the compost bins by the school garden. Before I graduated, I wrote a set of instructions for the future recycling committee, encouraging them to challenge their creativity to improve our school’s trash system. But it was not enough.

“You graduated and the gardening teacher left. Nobody wanted to be on the composting committee,” my leadership advisor told me.

We were students in a Title One high school, where a majority of students’ households fall under the low-income threshold. And only 76% of our students graduate — if my peers didn’t seem to care about school, how would it be possible to get them to care about reducing food waste?

My high school was not the only place where I tried to reform the waste system. My family had a balcony garden, a small space where I encouraged them to compost. I would think about my family’s finances — we never had enough money for piano lessons or Chinese language school, so where would I find the resources to learn about starting a food waste system?

More from NextShark: Asian Americans Are Not a Monolith, But We Have to Come Together

As the piles of waste grew, my Baba grew irritated. He wore a rubber back brace and dedicated a rare afternoon to driving our family’s recyclables to a center. Our apartment building’s residents could not have anything hanging off their balconies in case of a fire, so he also volunteered to prune the dragon fruit plant before any inspections from our apartment manager. Sometimes, my Baba slammed the balcony door behind him, saying, “Tài máfan [1]!”

When I went home during the holidays, I noticed the roaches, fruit flies and spiderwebs settled in the balcony garden. Every carcass of a dragon fruit plant was buried in food scraps. Through WeChat, Mami learned how to fill a pitcher with water and throw in food scraps to make fertilizer, yet the increased surface area with the wet food scraps attracted bugs. I told Mami this, but she was adamant.

More from NextShark: ‘Why do we have to fit in one box?’: Chef Roy Choi on activism, representation and the best bubble tea in LA

I wanted nothing but to reform my family’s food waste system, yet I could not convince Mami. I contributed scraps to her pitcher – at least she was trying.

Food waste as an Asian American

Mami wore the same proud expression as the Quail Springs Permaculture Farm folk, whom I met during an environmental club field trip a few years ago. After a two-hour drive from UCSB, the farm greeted us with peppermint tea and lemon scones.

A tall man in a straw hat — who we would come to know as Brenton Kelly, the farm’s advocacy director — spoke with us about the ethics of permaculture. “It’s like a three-legged stool. Two of those legs are common in our lexicon: care for mother [nature] and care for people, which is social justice. The third one is ‘fair share’ or ‘enough is enough.’ Going to live on a land and leaving a horrible scar is not fair share.”

More from NextShark: How to Cook Rice to Remove the Most Arsenic, According to Study

The farm’s waste systems were curated to match their usage, so most food scraps go to the goats or become compost. Even used toilet water goes back into the ground. I wished my high school had waste systems just like the one the farm uses. Instead, whenever our untouched food was tossed into trash bins, we were contributing to landfills.

“Everything feels so perfect,” I told my clubmates as we ate rotini salad, butternut soup and wild rice for lunch. “It’s like we’re watching a utopian novel come to life.”

This unsettling feeling intensified once I noticed the farm folk didn’t look like us.

I didn’t want to think about race. I was scared to enter territory I didn’t understand well. Nevertheless, race changes how food and environmentalism are experienced and perceived. The members of my environmental club were Chinese, Vietnamese, Filipino and Latino. Nobody from the farm had our cultural backgrounds and experiences. Nobody there looked like us. People like us — minorities from low-income backgrounds — were thought to not care about the environment, according to my environmental studies classes, because our concerns revolved around surviving from paycheck to paycheck.

However, low-income families prioritizing more immediate concerns over the environmental ones is often untrue. Minority community members from low-income backgrounds tend to rise up to defend their rights, demanding for a clean and safe environment. Our communities disproportionately suffer more from incidents of injustice and environmental racism. Our communities do not often have the privilege of resources to choose between fight and flight.

I discovered low-waste chef Max La Manna on his Instagram, where he shared tips about food waste such as making something edible from food waste and regrowing grocery produce on his windowsill. Now, wherever I move, water-rooting plants take over windowsills, balconies and patios.

Scallions — two inches snipped from a recent grocery haul — grow slowly, and when I would empty their water into the sink, there was a smell of savory with a subtle water rot. The roots were bloated; a translucent slime coated the tips. The leaves were wrinkled and hoarse. I imagined them praying for autumn rain, so I spritzed them and my dragon fruit, my tomato plant and my Food Bank sprouts.

I chose to honor my scallions this way because as an Asian American, scallions are my salt and pepper. Mami taught me how to fold them into her scallion pancakes (resembling mo banh xeo with creamy coconut milk), beat them in eggs for flavor and sprinkle them in fried rice for an exciting crunch. Scallions always have a home in my family’s supermarket shopping cart.

Whenever Mami surprised me with a visit from Los Angeles, the four-for-a-dollar scallions and other Asian staples found a way into my fridge as well. I am thankful. Even with food stamps, I am hesitant to purchase scallions at the grocery stores in Santa Barbara, where each scallion costs a dollar. There is not enough demand or interest from the affluent, white community here, and compared to Los Angeles, there aren’t enough Asian communities. It is cheaper to wait for my mom’s visits or to regrow them with water.

Using the scallions that Mami once brought, a housemate made scallion pancakes on our kitchen island the length of a skee-ball machine. His recipe smacked of umami. He seared his scallions in oil before brushing his dough with this oil to form more flavorful flaky layers. We dipped our pancakes in hoisin sauce, a vegan sauce that usually accompanies seafood.

These shared moments over food remind me why I regrew my scallions and buried them in my food scraps bin, why I became an environmentalist. Yet I am still trying to figure out what direction I want to take. At the 50th anniversary celebration of my university’s environmental program, the successful environmentalists I met said they have faith in me, that my passions give me a unique position and that chasing a career in environmentalism will make the world a better place. I believe them. One day, I hope to go back to my high school and give it the food waste system it deserves.