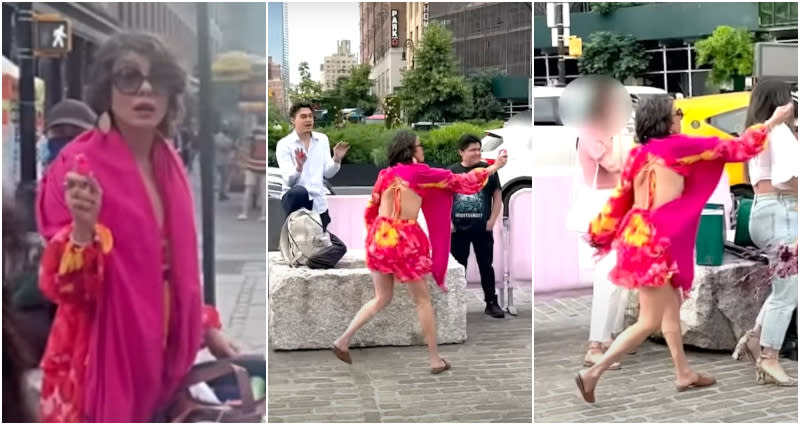 A woman accused of pepper-spraying four Asian women in New York City’s Meatpacking District earlier this month has been arrested and charged with hate crimes.

One of the victims, identified as Nicole, told NextShark that it all started when her group of friends — who were walking around the area — stopped behind a rock to decide where they would head next. A woman in pink, who was sitting on one of the rocks, suddenly turned and said “I know what you’re trying to do, you’re trying to harass me.”

The group tried to keep their distance but the situation escalated. Nicole recalled the woman telling them to “Go back to the country you came from” and “You don’t belong here.”

More from NextShark: Asian Dad With 3 Kids Chased Out of Ice Cream Shop in the UK, Allegedly Called ‘Monkeys’

Nicole said the woman began pepper spraying them when she took out her phone to record the scene. In a video, the woman can be seen still holding what appears to be pepper spray while people around her insist their distance.

The woman left the scene without issue. On Friday, New York police announced that they arrested Barker, a resident of Florida’s Merritt Island, in connection to the incident.

More from NextShark: Japanese Woman Who Beat Coronavirus Once Gets Infected AGAIN

At her arraignment on Saturday, Barker’s legal aid counsel told Judge Eric Schumacher that the situation was “amplified by media sensation.” The judge set her bail at $20,000, according to the New York Post.

Barker’s next court appearance has been scheduled for Thursday.

More from NextShark: Trump warns ‘Taiwan is next’ because US ‘did nothing’ in response to Russia’s invasion of Ukraine

Featured Image via Nicole for NextShark