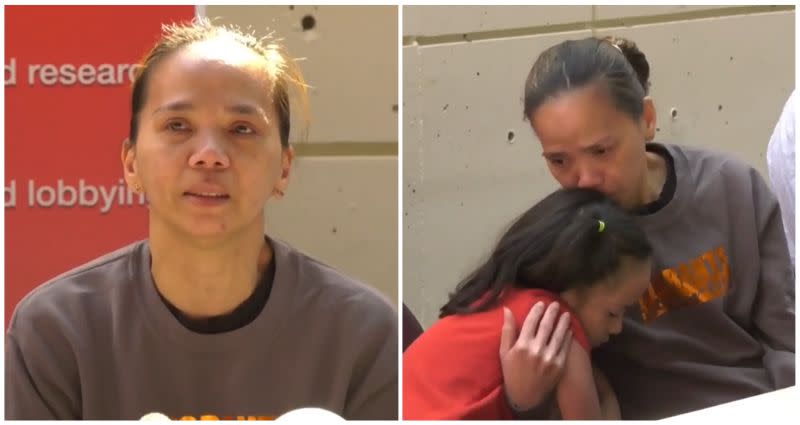 Supporters of a Filipino mother and her 6-year-old daughter who requires special medical attention are pleading with the federal government to stop their deportation from Canada.

Evangeline Cayanan, who entered Canada in 2010 as a temporary foreign worker, is set to be deported to the Philippines with her Canadian citizen daughter, McKenna Rose, on July 8.

The Filipino mother raised concerns of abuse during her time working; her employers allegedly promised to regularize her status as a way to exploit her. She reported two of her employers for harassment and discrimination.

Cayanan was charged with theft in 2014, which she alleged was retribution from one of the employers, according to federal court documents. The mother was not in the country at the time of the alleged theft, according to her lawyer.

“She was abused by her employer and abused by a system that has abused many people and throws people away back to their home country just to bring in a new batch of people to do the same jobs,” Whitney Haynes, a family friend, told CTV News.

When Cayanan was fired from her job, she lost her work permit and became undocumented in 2015, the same year her daughter was born. Cayanan’s application for a new work permit was denied, and she has been living in Canada without status since then. She filed applications on compassionate and humanitarian grounds in 2016 and 2019, which were both also rejected.

Cayanan volunteers with the foreign worker advocacy organization Migrante Alberta to support migrant workers. She also became an activist who fought to secure health-care access for children of undocumented parents. As a result, she was granted the John Humphrey Centre for Peace and Human Rights award in 2018.

More from NextShark: No jail time for man who shoved 92-year-old Asian man with dementia in Vancouver, says judge

McKenna was reportedly diagnosed with severe ADHD and other medical conditions that require special attention. Cayanan fears her 6-year-old daughter will not have the same healthcare access in the Philippines.

“I really need help for her,” Cayanan said. “I really need the school support, her doctor’s support, my friends’ support. My biggest fear right now is going back home bringing McKenna back to where I came. It’s so hard because on my daughter’s condition there is no pre-access to Medicare.”

Migrante Alberta, started a petition to call on Ministers Marco Mendicino and Sean Fraser to stop their deportation and grant them permanent resident status. The petition has garnered nearly 3,000 signatures as of this writing.

More from NextShark: Man in Wheelchair Gets Spit on, Called a ‘P*ssy’ INSIDE NYC Hospital

“It’s very complicated because Immigration would say, yes, the child is Canadian, and that she can stay,” Marco Luciano, the director of Migrante Alberta, told Taproot Edmonton. “But for a six-year-old child, going through foster care because the mom is deported is also not in the best interest of the child. Essentially, McKenna is being deported with her mom. The issue is not just about deportation. It’s about splitting the family – the mother and daughter – and bigger issues will come up when that happens, particularly for McKenna.”

Manraj Sidhu, Cayanan’s lawyer, hopes the Canada Border Services Agency will stay the deportation decision pending the mother’s latest application along with further evidence on humanitarian and compassionate grounds. Her original date of removal in May was moved to July, when the final decision on her case will be made.

“I don’t want to beg, I just want to fight for her rights. McKenna deserves everything, just like other Canadian children here in Canada,” Cayanan said during a news conference in Edmonton on Thursday. “I’m asking for all the support to stay here. McKenna belongs here. I belong here. We belong here. This is our home.”

More from NextShark: Boston Mayor Wu seeks limits on residential picketing after weeks of noisy protests outside her own home