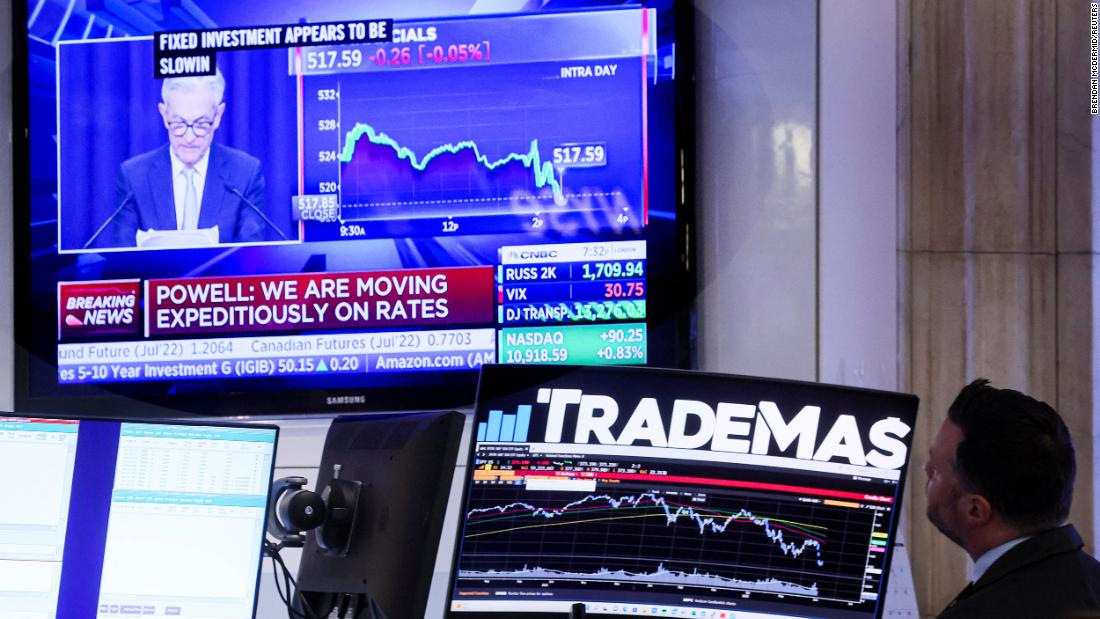 This afternoon, monetary policy nerds such as myself tuned in to watch the Silver Fox himself explain the Fed’s thinking behind its decision to raise interest rates by three-fourths of a percentage point — the most aggressive rate action the bank has taken since 1994.

Allow me to summarize Fed Chairman Jay Powell’s comments: Inflation’s bad. We’re doing our best. No one really knows what the heck is going on.

Here’s the deal: The disastrous inflation report that came out Friday almost guaranteed that the Fed would have to do more than the half-point hike it had previously indicated it would do. Prices surged 8.6%, which was up from the month before, which means, like, they’re going the wrong direction. That report was so bad some analysts even expected Powell & his merry economists to go even harder on rate hikes — why stop at 0.75, just go whole hog and jack them up a full point, Jay?

The answer is because he didn’t want to scare the crap out of investors who’ve just bellyflopped straight into a bear market.

And that so-called 75-basis-point move appears to have chastened Wall Street. It showed the Fed was serious but not panicking. Markets rallied in afternoon trading.

Why do higher interest rates matter?

This is one of the Fed’s primary tools to get prices in check. By raising rates from near zero at the start of the year, the central bank is making it more expensive for businesses and people to borrow money. Which obviously sucks if you’re a business owner looking to expand or if you’re looking to buy a home, or take out any kind of loan for any kind of reason in the near term.

Life’s already so expensive, and now you’re going to jack up the interest rate on my credit cards, Jay? What, I’m supposed to just stop shopping now?

And the answer is yeah, pretty much. Just don’t stop shopping completely, dear citizen — your ravenous appetite for consumer goods is the engine that fuels the world’s biggest economy and we’re all screwed if you stop those trips to Target where you go in for JUST ONE QUICK THING and end up with a new lamp, a propane tank for your camping trip, three swimsuits, some new stationery and a blender.

My colleague Nicole Goodkind is reporting from DC today, in the room where it happened…

NUMBER OF THE DAY: 2.9 MILLION

Ford is recalling 2.9 million cars over an issue that might cause them to roll away while parked. Essentially, the driver puts gear in park but some vehicles have a defective part that prevents it from actually, um, parking. Safety regulators have received four reports of injuries and six reports of property damage potentially linked to the issue.

The “greater fool” theory is a popular concept in finance, not to mention the darker arts of Ponzi schemes. The idea is that you can always make money trading on worthless or overvalued assets as long as there are other (more foolish) people down the line willing to bid them higher.

Imagine an asset that is essentially just a few lines of code with no apparent intrinsic value and no demonstrable real-world application. But infuse that asset with boundless hype from a handful of early adopters who stand to gain mightily if they can convince more people to buy said asset. Toss in some buzz words, tribalism, FOMO and handful of celebrity endorsements and you’re in business.

Here’s the thing: In case it wasn’t clear, we’re talking about bitcoin, which is getting absolutely hammered this week. And then just to pile on, Bill Gates disparaged cryptos and their sister product NFTs as “100% based on greater fool theory.” (Translation: it’s a scam).
Despite plunging values and turmoil at major trading platforms, the crypto faithful are shrugging, my colleague Nicole Goodkind reports. This crash is all part of life in the bitcoin biz, they say — the lows in a bear market are lower, but the highs are higher as well.

ICYMI, here’s a recap of the past few days:

But investors who’ve been at the crypto game for a few years don’t appear too worried (at least not yet) because they’ve seen this kind of thing before.

Look, crypto isn’t the only asset that’s having a bad week/month/year. Virtually all equities are getting hit by tightening monetary policy, which has pushed investors away from bets on riskier assets such as tech stocks and crypto.

But crypto’s got unique problems. It’s young — as in, born in 2009; as in, one of the youngest members of Gen Z; as in, it’s not even enrolled in middle school yet and it’s still a decade away from being able to drink legally. The market is almost completely unregulated, and it’s being propped up by hordes of celebrities and inexperienced investors who, if I had to bet, wouldn’t know a blockchain from a butter churn with a gun to their heads.

That’s why people like Bill Gates, Warren Buffett, Jamie Dimon, New York Attorney General Letitia James and a small but growing number of tech leaders are getting more vocal and organized in warning the public and lawmakers about the risks of crypto investing.

Those skeptics are smarting right about now as cryptos tank. As Buffett famously said: “It’s only when the tide goes out that you learn who’s been swimming naked.”

Enjoying Nightcap? Sign up and you’ll get all of this, plus some other funny stuff we liked on the internet, in your inbox every night. (OK, most nights — we believe in a four-day week around here.)