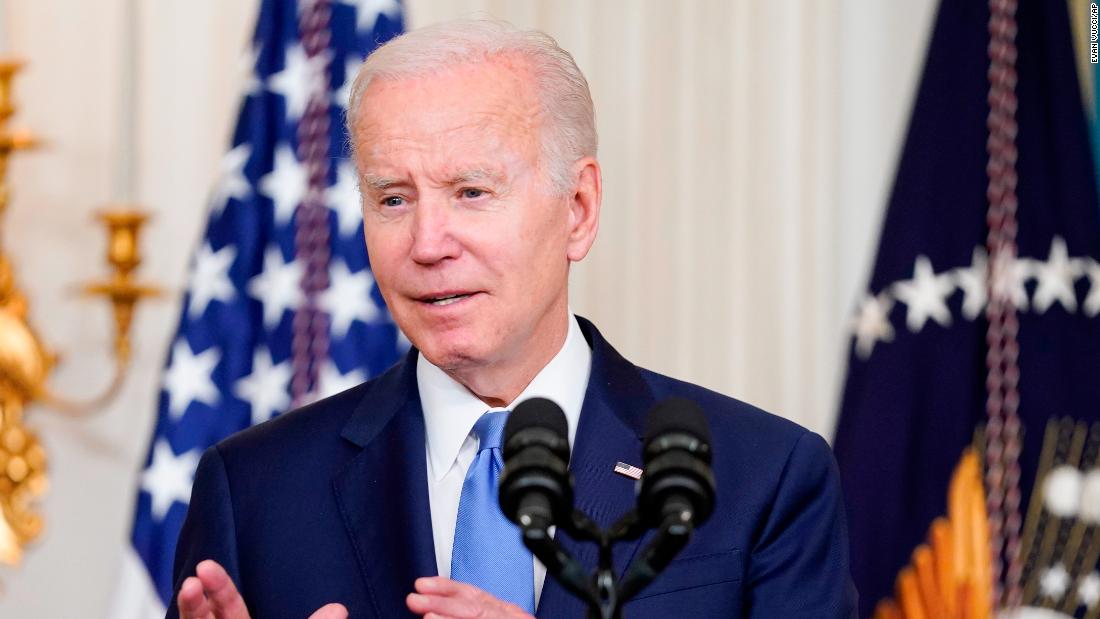 After remarks on the authorization of Covid-19 vaccines for children under 5 years old, Biden was asked about a letter from the CEO of Chevron, which accused the President of seeking to vilify oil and gas producers as Americans struggle to fill their tanks and the White House faces increasing political pressure.

“I didn’t know they’d get their feelings hurt that quickly,” he added.

The President has been turning up the heat on oil and gas companies in recent weeks as gas prices have shot up, with the national average climbing above $5 per gallon at one point last week. Biden has made blaming Russia’s war in Ukraine his top scapegoat for climbing gas prices but has also called out oil and gas companies for not doing enough to bring down costs, accusing them of profiting off the war.

Biden repeated some of those arguments on Tuesday, saying that the country needs “more refining capacity.”

“This idea that they don’t have oil to drill and to bring up is simply not true,” he said. “This piece of the Republicans talking about ‘Biden shut down fields,’ wrong. We ought to be able to work something out whereby they’re able to increase refining capacity and still not give up on transitioning to renewable energy. They’re both within realm of possibility.”

In response to the President’s criticisms, the oil industry has largely said that it is the Biden administration’s fault that prices are so high because of what they perceive as limits on domestic oil and gas production.

Chevron CEO Mike Worth said in his letter on Tuesday that Biden should stop criticizing the oil and gas industry and called for a “change in approach” from the White House.

“Your Administration has largely sought to criticize, and at times vilify, our industry,” Worth wrote in an open letter to Biden. “These actions are not beneficial to meeting the challenges we face and are not what the American people deserve.”

Worth argued the industry needs “cooperation and support from your Administration for our country to return to a path toward greater energy security, economic prosperity, and environmental protection.”

The letter was a response to a letter Biden sent to major oil refiners, pressuring them to increase their production. In that letter, the President told oil companies to take “immediate actions” to ramp up supply, telling them that “historically high” profit margins are unacceptable at a time when Americans continue to see soaring prices at the gas pump.
There have also been other broadsides from the White House toward the oil and gas industry. Earlier this month, a White House official strongly criticized Big Oil for banking huge profits in the wake of Russia’s invasion of Ukraine, which the administration has blamed for soaring gas prices, telling CNN it was “outrageous that oil and gas companies are able to take advantage and make four times the profits that they made when there wasn’t a war.”
Oil executives will convene at the White House this week to meet with Energy Secretary Jennifer Granholm, but the President has said he will not attend the meeting.

The Energy Department invited representatives from Marathon Petroleum, Valero Energy, ExxonMobil, Phillips 66, Chevron, BP and Shell to discuss high gas prices. Granholm said Sunday on CNN that the group would talk about the refining capacity in the country.

The President and his team have acknowledged in recent weeks that there is not much he can do to address soaring prices, and the actions he has taken so far, such as a record-breaking release of oil from the country’s strategic reserves, have not worked.

Still, the President is considering other options. He said Tuesday a federal gas tax holiday would have only a minor impact on funding for roads as he continues to mull whether to support such a move.

“It will have some impact. But it’s not going to have an impact on major road construction and major road repairs,” Biden said, citing the major infrastructure package passed last year.

Biden is currently deciding whether to back a temporary suspension of the 18.3-cents-per-gallon tax on gas, a step that would require congressional approval. A gas tax holiday hasn’t gained traction on Capitol Hill to date.

“I’m in a process and I’ll have a decision before the week is out,” Biden said.