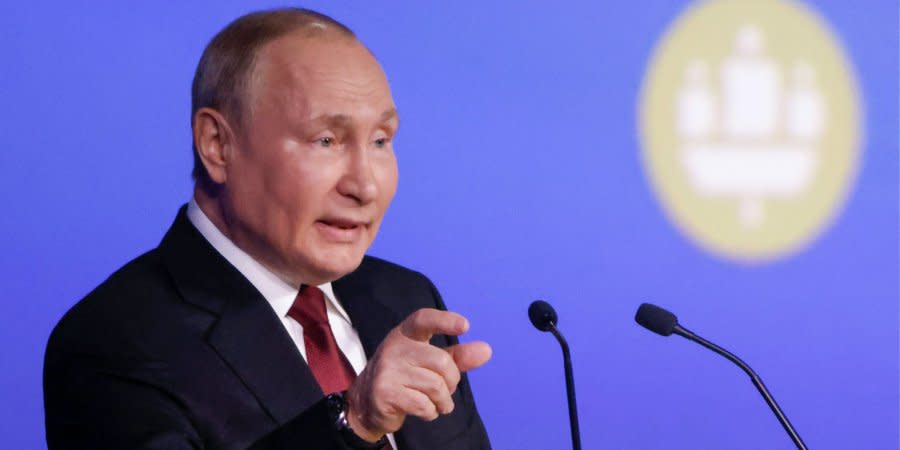 Yakovina analyzed who is complaining about what, and whether they are capable of removing Putin from power. We publish an edited transcript of his analysis below.

Even people close to Putin do not believe in the prosperity of the Russian economy.

Recently, three people from the dictator’s retinue (two from close, one from far) wrote telling columns for Russian media RBC.

The most distant one is Ruben Vardanyan. He is the founder of Troika Dialog, probably the first and main financial and investment company in Russia. Vardanyan is the founding father of Russia’s financial sector, so to speak.

He announced that Russia was approaching a very serious crisis. It is forbidden to call the crisis a “crisis” – they have been instructed to use the term “transformational change”.

He writes: “Transformations will be painful, and there will be no sphere of ​​our lives left untouched. The situation is much more dangerous than the fall of any system or a military, economic, or financial conflict.” In other words, he claims that the crisis facing Russia is worse than war, the economic crisis, and the financial confrontation with the West.

According to Vardanyan, the whole world is changing very quickly, and those who do not adapt will lose out. He opines that the middle class in the world is disappearing, and in its place emerges two classes – the aristocracy (very small), and a huge mass of poor people who will be given a basic total income so that they do not starve to death, and VR helmets so that they are removed as far as possible from reality.

Vardanyan writes that Russia is on the verge of a hellish crisis and will probably not be able to respond properly to it.

Andrey Kostin. This man is closer to Putin. He is the head of VTB Bank. He writes that thanks to and within the framework of globalization, Russia has created a very successful stock market from scratch, a huge ultra-modern financial sector, and Russia has begun accelerated development in these two areas. Just then the “special military operation”, as they call it, began, and everything was crossed out.

Because without Western technology, business practices, and management, without participation in the global system, Russia will not be able to go on as it has. And in general, he believes, everything does not work in isolation from the West, and Russia’s financial sector, stock market, investment – all this will perish. Kostin, of course, is very unhappy with what is happening.

Sergey Chemezov. He is one of Putin’s closest friends. When Putin was serving in Dresden, Chemezov was sitting across the table, meaning they have been friends since the days when they worked in the KGB together in Germany. Chemezov is now in charge of Rostec, a huge state-owned industrial conglomerate of dozens of companies that produces everything from pins and ballpoint pens to fighters and space equipment.

Chemezov also wrote a column for RBC. He argues that it is pointless, economically impractical and simply impossible to replace imports. According to Chemezov, isolation, including technological isolation, as well as the attempt to do everything alone is a “[bridge] to nowhere”. And it is worth noting that this is not the oppositionist Alexey Navalny, not some “liberals” – this is what Vladimir Putin’s closest KGB friend says.

By the way, Chemezov is said to be a savage, an extraordinarily evil and vengeful man. And this wonderful gentleman claims that Russian industry will soon perish in isolation from the West.

Rostec plants are closing one after another, because there are no components, nothing to produce. And Chemezov will be asked: “What about your plants, my friend? Why are they closing?” And he will have nothing to say in response. After all, he cannot state that they are closing because Putin started the war. Because of this, Chemezov has written numerous columns.

That is, these three claim that the situation in Russia is absolutely catastrophic. They appreciate that it will only get worse if the war does not end.

But wherever they are asked in comments what exactly needs to be changed, these three resorts to pregnant silences. They offer nothing. Only Vardanyan says that politicians and politics in their current form are outdated, we need business approaches to solving problems… This is merely general blabber, this is meaningless.

In these columns, they realize that while sanctions are in place, the degradation of the Russian economy will only accelerate.

How to remove these sanctions? War, as they admit, is not a way out, as even a complete victory in this war will not remove sanctions. Everyone comprehends that they need to look for very radical solutions, namely, to give up waging war.

But the fact is that their pieces show that the war can be stopped only in one case – if someone other than Vladimir Putin becomes the president of Russia. That is, Putin must be removed.

This is what I infer from these columns. I can say that I am a biased reader, but in my opinion, when they say that it is a catastrophe, and nothing helps, one conclusion arises – something needs to be changed at the conservatory. And at the Russian conservatory, only one part can be effectively replaced – the president.

Openly, of course, no one, neither the second nor the third, writes about this. They do not even hint that Putin should be removed. On paper, there is nothing to bring against them. But these columns are just a cry of despair. People voice the problems they have faced and expect some feedback from society. Not from a society that nobody gives a fig about, but from the Russian elite – bosses, officials, deputies, oligarchs, generals, governors, ministers…

Read also: French media say that when traveling abroad, Putin is followed by attendant who collects his excreta

And if someone says “Ruben, Andrey or Sergey wrote everything correctly, the situation is very difficult, we are on the verge of big problems”, then this person is a potential ally. You will not approach him and say: Let’s conspire against Putin. But you can see that there are such people. And if someone says that Russia will cope with these problems, it is most likely to be an opponent.

Of course, this is not a conspiracy, it is “testing the waters”, probing the ground for future reflection. The ratio of allies to opponents will determine what they do next – either they shut up or some development begins. I do not know what this development may be. I’m not saying that the conspiracy against Putin will start immediately, but at least discussion will begin.

But we can see that in Putin’s inner circle (Chemezov is a brother figure to him) there are great doubts about the correctness of the chosen course. This is very good. This is the first major sign of what can be called the split of the elites.

So far, Russia-focused outlet Meduza has given an indirect confirmation of my theory that cracks have set in. There is an article that today in Russia, in the Kremlin and around it, there are three main pillars. One could even say – parties.

There is the party of peace. Kostin and Chemezov were named among the significant participants. The head of Sberbank, German Gref, is also placed there. Two Meduza sources note that Yuri and Mikhail Kovalchuk are close to the party of peace. These are Vladimir Putin’s friends.

Mikhail especially has influence vis-a-vis Putin because he is a genuine Soviet physicist. He runs a research institute, is a prominent scientist in the field of physics, so he has a great influence on Putin.

Read also: The folly of “off-ramps”. When Ukraine wins the war, Putin will build his own

That is, it is a team that advocates for the lifting of sanctions, for a future truce of some sort. Let’s put it this way: there is such a thing as “not the most bloodthirsty” wing of the Kremlin administration. It is also said that these people are still their own people with their own ideas, they are not united.

They don’t have meetings, because I think if someone finds out that they are getting together and stirring things up, they will be nipped in the bud and removed immediately. These are very influential people, but they are not very popular with Putin yet.

These people are influential, but they are in a worse situation. Putin listens to them, but they often despise one another, and they have constant quarrels and conflicts.

But Putin is now interested in war, he wants to win. He is not going to end this war before the Donbas is completely captured. Then he can listen to the so-called party of peace.

There is also the so-called party of silence, as Meduza writes. This is Mikhail Mishustin, the Prime Minister, and Sergei Sobyanin, Mayor of Moscow. They are going to side with the winner whenever he emerges. Now they are trying to stand aside, not to comment on what is happening – namely, the war in Ukraine. They want to distance themselves as much as possible.

Sobyanin was recently taken to Luhansk to come and promise some help. According to Meduza, he tried to beg off from this trip until the last moment, as he did not want to be seen in Luhansk because he believes that it could harm his career in the future.

In any case, there is now a basis for conflict between the party of war, peace, and the party of those who say nothing. Why did this basis appear? Because the party of war messed up quite a bit. The Ukrainian armed forces sank a warship, and the tug Vasily Bekh. Thanks to this, the national party of peace can tell Putin: “Our opponents are imbeciles, they sent a bunch of people to Snake Island, and they don’t know how to get them out of there.” If another ship goes to this island, it is very likely that it will also be sunk.