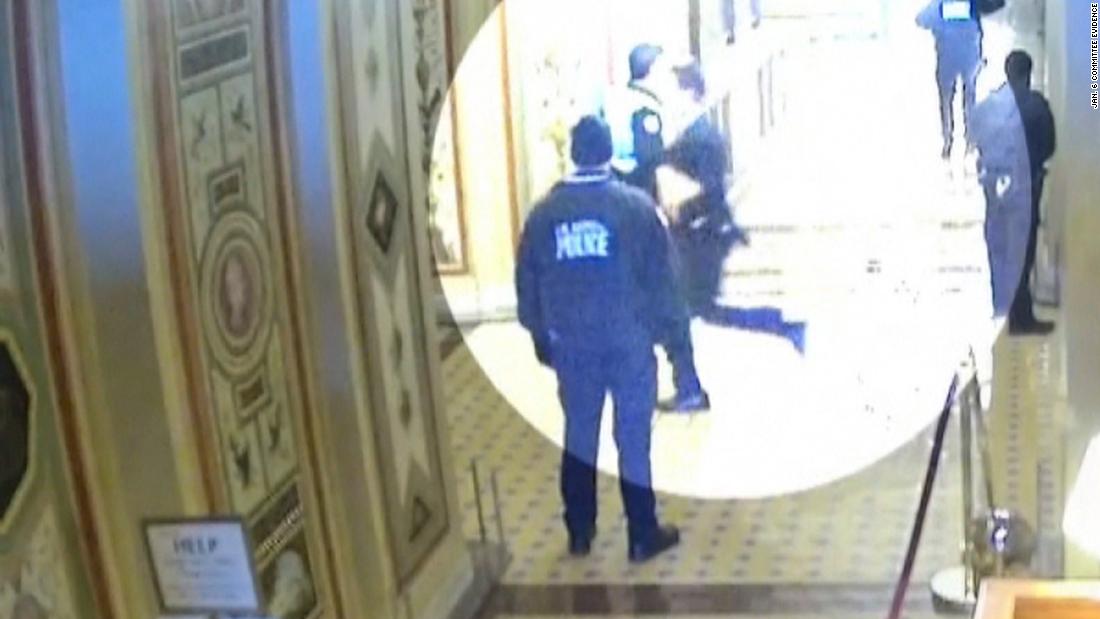 “I don’t regret anything I did that day,” the Missouri Republican Senator told CNN’s Manu Raju Wednesday. “And, you know, it’s a privilege to be attacked [by] the January 6 committee. And I want to thank — say thank you for all the help with my fundraising. It’s been tremendous.”

In the early afternoon, he was photographed on the east front of the Capitol with a raised fist in solidarity with the protesters, who had not yet swarmed the Capitol. As the January 6 committee has noted, Hawley made his gesture while safely protected by barriers and Capitol Police.

Later in the day, as rioters stormed the Capitol, the January 6 committee unearthed video of Hawley hightailing it out of the Capitol — literally running from the same mob that he had egged on earlier in the day.

“Sen. Hawley fled after those protesters he helped to rile up, stormed the Capitol,” said committee member Rep. Elaine Luria, a Democrat from Virginia, as the slow-mo of Hawley beating a retreat was shown.

“Later that day, Senator Hawley fled after those protesters he helped to rile up, stormed the Capitol.” pic.twitter.com/YDOIllqsxX

Hawley dismissed the footage as “100% trolling” and added: “I’ve just come from Missouri and all I can say is that the people in Missouri are pretty grateful for my stand.” (Hawley was one of eight senators who opposed the certification of the election results on January 6.)

At one level, Hawley’s right. The January 6 committee didn’t have to use slow-mo footage of him fleeing the Capitol. That was a cherry-on-the-top situation.

But, viewed more broadly consider what the committee was trying to show: Hawley’s hypocrisy.

This was a man who egged on the crowd that eventually overran the Capitol and then, when faced with what he — and others espousing the same lies about the election had wrought — was forced to flee.

The twin moments helped illustrate the Frankenstein’s monster nature of the following that Donald Trump and his enablers like Hawley had built. These people riled up the crowd, fed them lies about the elections and then lost their ability to control what happened next.

That Hawley is neither remorseful nor apologetic about his role in all of this — both on January 6 and in the days leading up to it — shouldn’t surprise anyone who has been paying attention to politics in our current moment.

Trump’s appeal — and that of those who seek to follow in his footsteps like Hawley — is built on a) never apologizing b) always casting yourself as a the victim and c) leaning in when controversy hits.

What gets lost there is what’s actually right. Was it right for Hawley to egg on the soon-to-be rioters? And does justifying those actions by saying you raised a bunch of money off of them change that fact?

The answer is no and no. Unfortunately Hawley either can’t or doesn’t want to see that.