A Decade After DACA, a New Generation of Undocumented Students Rises 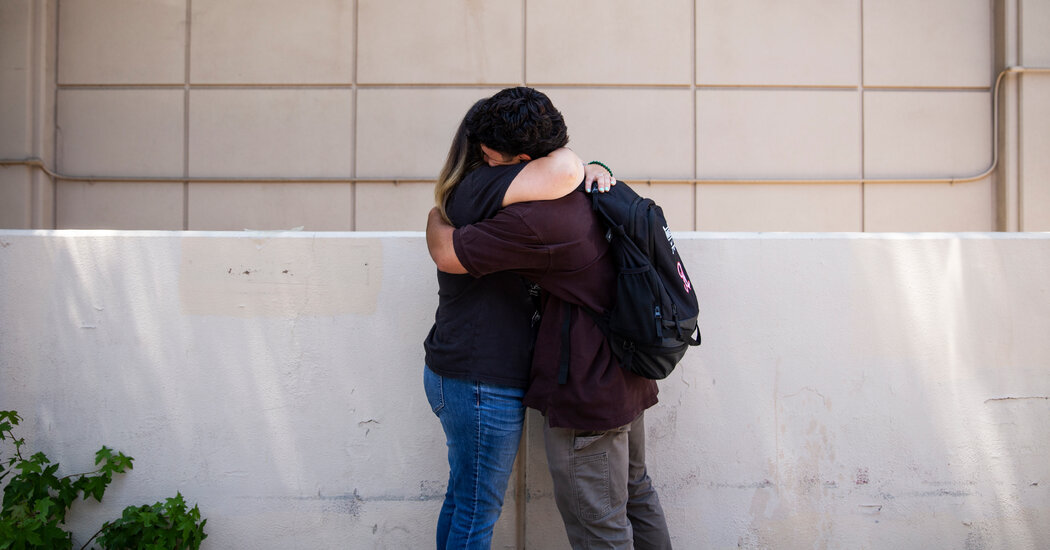 LOS ANGELES — Tommy Esquivel graduated from Hollywood High School in Southern California last week with awards honoring his determination, his record of service and the highest average grade in his Advanced Placement environmental science class. “I am excited to see what you will do with your future,” his science teacher, Alycia Escobedo, said in a farewell note. “Do big things.”

But Mr. Esquivel, 19, who grew up in Los Angeles without legal immigration status, faces significant obstacles to realizing his potential. He has limited access to financial aid for college. In many states, he cannot obtain a driver’s license. Without a Social Security number, he cannot legally work. And though he has lived in the United States since the age of 9, he could at any time face deportation to Guatemala.

For the first time, a majority of the undocumented immigrants graduating from high schools across the United States have none of the protections offered over the past 10 years under an Obama-era program that shielded most of the so-called Dreamers from deportation and offered them access to jobs and help with college tuition.

The Deferred Action for Childhood Arrivals program was intended as a stopgap measure to protect some of the nation’s most vulnerable immigrants — young people who were brought to the country as children and have grown up essentially as Americans — until Congress could agree on a comprehensive immigration overhaul or, at the least, pass a bill to offer them a path to citizenship.

During the decade since DACA took effect in June 2012, some 800,000 young people have registered. But a long-term political solution never materialized. Under constant attack by Republican immigration hawks, DACA stopped accepting new applications; it has remained mired in legal battles since President Donald J. Trump tried to quash the program in 2017.

Mr. Esquivel is among nearly 100,000 young immigrants who are entering adulthood this spring in a precarious situation — without the most basic tools to build a future in the only country many of them have ever known.

“After doing all this work, I don’t know where it’s going to lead me,” said Mr. Esquivel, who joined his parents in the United States from Guatemala when he was in the third grade. “I don’t know what I can do.”

DACA, which over the years has attracted some bipartisan support because its beneficiaries are among the most sympathetic of the nation’s undocumented immigrants, has been transformative for many by enabling them to work legally — and by extension afford college, build careers and buy homes. The idea among supporters was that Congress eventually would address the immigration status of the estimated 11 million people who are in the country illegally, rendering the temporary program unnecessary.

“The hope was that DACA would be a bridge to legislation, and that an administrative program would no longer be needed because there would be a statutory one,” said Alejandro Mayorkas, the homeland security secretary, who led the federal agency that designed and ran the program that took effect on June 15, 2012.

“The divisiveness appears to be an obstacle even to doing things for which there is bipartisan agreement,” he said in an interview.

Immigration analysts estimate that the new class of young immigrants who grew up in the United States but lack legal status or any DACA protection will grow by 100,000 each year.

Today, 60 percent of those protected by DACA are 26 or older, and even if the program survives pending legal challenges, there is no way to enroll younger immigrants like Mr. Esquivel, who arrived in 2012, unless it were amended to include them, which is unlikely given the political discord over immigration.

“For me, DACA was a crucial trial run for when we would legalize millions of people,” said Gaby Pacheco, 37, a former undocumented student who led a campaign, starting in 2010, that brought the plight of Dreamers to the American public and convinced the Obama administration to provide them relief.

“Yet here we are 10 years later; it’s like we regressed,” said Ms. Pacheco, director of TheDream.US, a program that provides college scholarships for undocumented students.

The inability to hire tens of thousands of high school graduates comes amid a “massive shortage” of labor that has developed partly because of the country’s aging population and low birthrate, said Neil Bradley, chief policy officer for the U.S. Chamber of Commerce.

“Congress has had a decade to solve this issue, and it defies reason that they have not found a way forward,” he said.

Teresa Perez, 19, who immigrated to the United States from Mexico when she was 2 years old, was about to turn 15, the qualifying age to apply for DACA, when Mr. Trump rescinded the program in September 2017.

Still, Ms. Perez persevered — goaded on by her older sister, who has DACA protection — and last year was admitted to the University of Utah. She cobbled together grants from groups that did not require DACA status to cover tuition.

But after completing general education classes her first semester, she was informed that she could not enter the nursing program because she lacked a Social Security number.

“It takes a big toll on you when you have something like this impacting your life,” said Ms. Perez, who is mindful that a shortage of nurses is compelling many U.S. hospitals to recruit abroad.

Domonick, a 22-year-old undocumented student from Turks and Caicos, arrived in the United States in 2007 at the age of 7. Eight years later, he could only watch as others his age applied for DACA: He had entered the country a few days after the program’s cutoff date.

Without DACA, he cannot get a driver’s license or state identification in Florida. A scholarship from TheDream.US has enabled him to attend Florida International University. He expects to graduate in December with a degree in accounting and data analytics.

“Will I be able to find employment in my field, contribute to this country, ever live a regular life?” said Domonick, who did not want his last name used for fear of drawing attention from the authorities. “Will I have to pack up and leave the only place that I call home?”

Asians represent the fastest-growing cohort of undocumented students, and among them is James Song, who came to Chicago from South Korea on a tourist visa when he was 9 and never left.

While attending high school the past two years he has worked long hours for cash at Korean restaurants to save for college, and hopes to study biochemistry in the fall at the University of Illinois. Despite receiving some grants, he is still short.

“These issues have made it difficult for me to have hope and see into the future,” said Mr. Song, 19, who has received support from the Hana Center, a nonprofit that serves Asian immigrants.

But he cannot imagine living in any other country. “All the people I know are here,” he said. “I’m not good at reading or speaking Korean.”

At Hollywood High, a Southern California landmark whose graduates include the actress Judy Garland and Warren Christopher, a former secretary of state, Mr. Esquivel was admitted to the New Media Academy, a magnet program that combines college prep with training in video production and animation.

He excelled academically, joining the baseball team and campus clubs. He gave school tours. “Every kid was trying to figure out where they belong in the social ladder,” his freshman English teacher, Casey Klein, said. “Tommy was genuinely himself, nice to everyone. Never complained.”

He seldom talked about his undocumented status.

In 2020, Ms. Klein recommended him as a mentor for a summer program that eased at-risk incoming freshmen into high school, a position that paid $15 an hour.

But the school district employment form required him to enter a Social Security number.

“The endearing thing about Tommy is that he was like, ‘I can’t get paid because of my status, but I still want to do it,’” recalled Ali Nezu, coordinator of the New Media Academy. So he did.

“I want to be a cinematographer,” Mr. Esquivel said, “or a grip, just someone able to help around the set and fix anything that needs fixing.”

But he has had to keep passing up opportunities.

He was approached last summer about a filmmaking internship but had to decline because he is undocumented.

Early his senior year, Ms. Nezu intended to recommend him for a paid internship at the British Academy of Film and Television Arts, one that had jump-started the careers of some Hollywood High students. When it became clear that undocumented students were not eligible, she picked another student.

Mr. Esquivel celebrated with his family and teachers. But then he took a hard look at his situation.

Most of his tuition would be covered by a state grant for which undocumented students qualify. But how was he going to afford $17,000 in room and board with no ability to work?

He decided to enroll at a community college near Los Angeles, Santa Monica College, where he would be able to live at home.

On his last day of school on Friday, Mr. Esquivel thanked each of his teachers, his eyes moistening as they described him as a gift to the school community.

“Everybody loves you and feels good being around you,” his English teacher, Bodin Adler, said before pulling him close for a hug. “I’m really going to miss you.”

In his family’s modest apartment, Mr. Esquivel’s mother displayed his high school awards — a glass trophy, a wooden plaque and certificates — on a table.

His friend group planned a road trip to San Diego, but Mr. Esquivel decided that he better not go, lest they get stopped at a Border Patrol checkpoint.

“I feel that I am not an actual person in this country, like I can’t be a part of this country’s experience,” Mr. Esquivel said. “I feel like I could do more, but there’s limitations.”